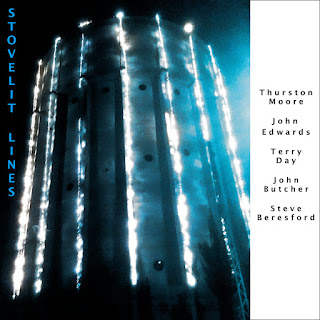 During the Covid-19 pandemic, John Butcher has been releasing a series of recordings on Bandcamp under the general title The Memory of Live Music. So far, there are seven in the series, and each is of special interest. Stovelit Lines, the fifth of them, documents a quintet performance from November 20, 2017 at Iklectik in London. The band includes four London regulars ‒ John Edwards on bass, Terry Day on drums, Butcher on soprano and tenor saxophones and Steve Beresford on piano and electronics ‒ with the American Thurston Moore on electric guitar. The group seems to leap out, a full-blown, one-time band that ought to be legendary, producing music that is filled with mysteries, mysteries of source, direction and meaning that are filled with diverse kinds of resonance.

A 45-minute piece in three segments, the work begins with a suggestion of the uncanny. There is a series of sounds, but they do not immediately suggest or yield their sources. There are strings and percussion, but the strings behave like incidental percussion, the percussion like strings. John Edwards’ bass may be at the centre here, a few heavily struck notes suggesting string tympani. The amplified, high, metallic strings are likely Moore, though more abstract than expected. Day and Beresford are quietly abstracted as well. When Butcher enters briefly, his lower register suggests an organ; the next time it will suggest a primeval reptile. The growing knitwork of Moore’s glassily electric guitar strings and Beresford’s electronics quietly denies origin, conjoining at times with the blur of percussion and bass, a host of random noises that together become a dream-like netherworld until Beresford’s piano sounds actual chords and Butcher plays a densely textured, extended melody.

The second part begins in more mystery, with Edwards’ acoustic upper register acting as an additional, repeatedly blurring, seeming hand amidst the higher frequencies of Moore’s amplifier. There are instances of air passing through columns, a sizzle of electronics and resonance that create unknown voices, like messages from vague spirits, to be referenced, annotated, argued over later, then lost. When the full group assembles, there’s an explosion of perfectly coherent free improvisation, perspective and perception notably skewed and time fooled, the music convincingly mapping uncharted space. Eventually Butcher and Moore race through the forcefield of Edwards, Day and Beresford, saxophone and electric guitar becoming so intense that the other instruments become part of them until Butcher’s mad duck cackle and Coltrane-swirl drive through the looming mass of Edwards’ bass and a final rush of Moore’s squall.

There’s a long coda in which Beresford, Moore and Edwards recall all that has been gained and lost in the forty odd minutes preceding, then Butcher re-enters, playing all the moments, lyric and exploratory, of the saxophone tradition as Moore hangs about the others’ structural bearings like a fire in a cathedral. A final tenor explosion rises over that, the impending chaos here so shaped in its structural opposition to form that it might be more convincingly heard in the present year, three years after its making, with all its final burnt-out blips and smears and sudden brusque string strokings more apt now than in the year it originated.

Part of the joy of free improvisation is that it can offer up textures that one has never encountered before, that the band likely has never heard, whether it’s the particularly novel exploration of an instrument or the combination of approaches that are either oddly similarly or, likewise, divergent, textures arising that are not only new, but which reconfigure the music’s possibilities, textures original and sweet becoming original and haunted and then original and machine-like. There’s some of all of that here.