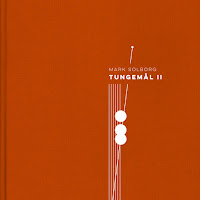 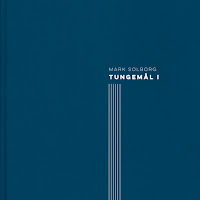 TUNGEMÅL means tongue or language in Danish. It is the title of a new multimedia project of Danish-Argentinian guitarist-composer-improviser-educator Mark Solborg - 3 discs and about 2.5 hours of music, focusing on the electrified guitar as a voice in contemporary chamber-musical contexts, plus two books with corresponding and insightful reflections, graphic illustrations, scores and photos. This project was developed over three years and maps Solborg’s fascination and investigation of the spatial topography of the guitar and the guitar as a musical voice. This extensive and profound artistic study seeks to expand our awareness to the sonic horizons that modern guitar inhabit, solo and with close comrades, acoustically or being translated through a loudspeaker or a set of satellite speakers, or simultaneously, and asks if can come closer to the intimate speaking voice of the creating musician.

TUNGEMÅL Vol. I focus on solo works, and all the 19 intimate pieces were recorded live in one take, in one room, with no overdubs. Solborg divides the pieces on the two volumes into conversations, debating and arguing with himself, using a sampling device that operates in a rather chaotic, random and unpredictable way; string and fingers, using his right-hand fingers without a pick in order to explore intriguing dynamics and sounds; songs, simple melodies that function as “ear-cleaners” between the longer and abstract pieces; preparations and devices, employing different objects to prepare the guitar in order to produce new textures and timbres; and pitches, using a variety of speaker combinations and controller to tweak the pitch or bending and adding pressure to selected strings, and Solborg mentions that he was inspired by the work of Mary Halvorson. In the second volume, he adds another category, spaces, a set-up in selected rooms, with guests who join in the investigation of Solborg’s habitat.

Attentive listening to Solborg’s musical language and vocabulary on the 19 short pieces of TUNGEMÅL Vol. I may identify echoes of the imaginative harmonics and the unique manner of pitch organization of Derek Bailey, the mysterious, resonations guitar environments of Steve Tibbets, the quirky, angular lines of Halvorson, the beautiful, folk-ish melodies of Egberto Gismonti and Ralph Towner, and exotic West-African and Far-Eastern string-instruments sound. But every time that you may think that Solborg is quoting one of these seminal sources, you immediately realize that he turned these elements and ideas into whole new sounds and timbres, made them as part of his own rich and organic TUNGEMÅL.

Solborg writes in the first book: “I find more and more that the magic lies in the imperfections. Authenticity. An opening - and the notion that a person is behind. That something is at stake. That the courage to lose control is present in the performance. Intentionally or as a form of unspoken accord among the performers. A wise friend and colleague recently said that she considers imperfection a space of possibilities - and always welcomes it… Do I want the imperfect? Unperfect? Yes”.

TUNGEMÅL Vol II is a double album that contains works for duo and trio, recorded on three sessions at The Village Studios in Copenhagen, offering written material, improvisations and TUNGEMÅL spatial concept in constellations of three duos and one trio. Solborg invited pianist Simon Toldam, reeds player Lars Greve (clarinets, bass clarinet, soprano, tenor and baritone saxes) and Italian reeds player Francesco Bigoni (who co-leads with Solborg the On Dog quartet), who plays the tenor sax and clarinet. The 20 pieces are described as “a catalogue or thesaurus” related to Solborg’s investigations.

Solborg says that he wanted his guitar strings to breathe and adopt a similar approach to phrasing, attack, and especially the intonation of the reeds instruments. And he wanted to emphasize the “string side” of the guitar and the piano, prepared or played with fingers, and to balance with the sound of the acoustic grand piano with its long strings and vast harmonic spectrum. This approach allows trigger sonic experiments that immediately visit enigmatic but poetic, sound-oriented territories. All the pieces are contemplative in spirit, some are quite noisy ones, others are more spacious and quiet soundscapes. “Letting it live its own life or actively stopping it to make space for silence or new sounds”, Saolborg adds. “Playing veeery quietly makes me listen more… and creates a lot of space...maybe, instead of assumptions, narratives and eager stories being told, there’s room for a question?”

Solborg’s guitar materializes here as an adventurous and provocative new instrument, distorted, processed, enlarged and geographically displaced, a sound box that keeps surprising with new dynamics and timbres. An instrument that puts more questions and dilemmas than clear answers, about experiencing sound in the most physical manner possible, the process of making music and the listening experience, all focused on the electrified guitar acting in an acoustic landscape. “What happens to the conversation if your voice is - or isn’t - soft enough for you to be able to hear other voices in the room? Is there a tongue - et tungemål - for both instruments? Can I have both worlds? Play two layers of guitar simultaneously, live, in the musical moment… and how do I record and communicate what I discover? The two volumes of TUNGEMÅL leave plenty of time to meditate and ponder on these fascinating sonic koans.