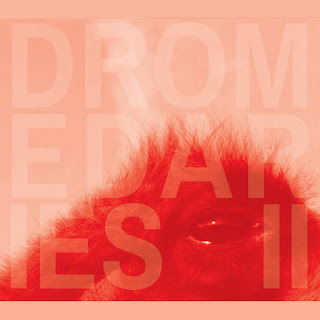 Irreversible Entanglements is one of the very few free jazz/improv outfits of today that really worth noting down that they are pushing the envelope of jazz tradition. Having their roots (not just musically I would comment) in the period (late 60’s-early 70’s) when free jazz met the wider black tradition (remember what Archie Shepp did during those years), they channel the distress of our dystopian present. I really love everything they have recorded.

Keir Neuringer is their saxophonist and a main factor of their sound. I cannot say I’ve listened to a lot of his other stuff (which is definitely the case for drummer Julius Masri and double-bassist Shayna Dulberger), but after listening to this amazing cd, I should look and listen closer. On a first level Dromedaries II is the second part of a cassette that came out three years ago and I haven’t listened to it.

But Dromedaries II is one hell of a cd! Many-many kudos must also go to Relative Pitch head man (solo after the sad death of Mike Panico) Kevin Reily. The label is still staying strong, producing ever-expanding musics of top quality. I’m a fan, I know, but you should be too. Dromedaries II consist of four long tracks (from ten up to thirteen minutes) that move like a spiral between improvisation, the energy of free jazz, and melody with a strong essence of eastern traditions. This is mostly because Masri’s playing never stops zigzagging between all those, while keeping the rhythm with an ease and flexibility of someone who knows his stuff.

Neuringer’s playing is fierce and sometimes even far out. I really like how the sax’s growls, screams, yelps follow Dulberger’s double bass in path of duophonic mayhem. At the same time they incorporate almost silent moments, passages that each musician shines, making his way not as some over the top soloist but as an individual voice that, sometimes, is heard by itself.

There is a constant flow of energy and ideas, a motion of feelings. Dromedaries II is a gripping cd that never lets you down, does not leave you with even a second of “oh, I’ve heard this before” feeling. If I had listened to it a few weeks back it would have definitely make my top list for this strange year. Still a great, difficult recording that demands full attention from the listener.

This album is a real scorcher, fantastic!