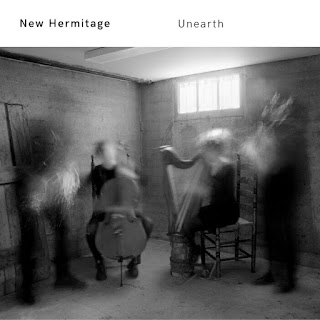 Canadian quartet New Hermitage evokes cinematic sketches with their expressive chamber music on Unearth. Their sound is spacious, slow, quiet, delicate, and cherubic. Less concerned with direct communication or extending timbral and structural boundaries than contributing to an atmosphere or embellishing the silence, often cathartic in its bittersweetness. Besides “Pine Bottle Skylight” and “In Amber,” the music is played freely, though its undeniable resemblance to its vivid titles suggests there’s a good bit of intent behind it. At eleven tracks over just 35 minutes, the pieces are fleeting, but not hasty; the calm nature of the music makes the pace across tracks feel more lightning bug than lightning, more warm glow than flash. Impressionistic.

Andrew MacKelvie’s soulful zephyrean offerings on saxophones and bass clarinet blend with breath and key clicks to underscore the low volume, low density, and fragility of the music. Bright twinkling and plucked melodies grounded in nursery rhymes or similar traditional musics from harpist Ellen Gibling most often provide a more recognizable beauty and light to the environment. The whinnying arco and suspenseful swells of India Gailey’s cello temper the sound with melancholy. And Ross Burns’ guitar gives the atmosphere edge with transcendent ebow drone, deep om, amplifier buzz, and some twang. To mention just a few approaches of these musicians.

The sound seems intimately attached to the titles given to it, many of which reference creation through destruction. Gas born from boiling, a sprout’s upward charge against the topsoil’s battlements, a desert growing from consuming the landscape, the preservative prison of amber. Some titles render nature’s reclamation of materials from the human realm. Rubble. Rust. Skeletons. All of these processes are slow, marked by little violent breakthroughs. A ped of soil cracking. The final jar of an insect touched by gluey sap. A wall, or a rib, fracturing and falling from the weight and weathering of time. Just like this quartet’s interjections into the constancy of silence.

While New Hermitage deftly establishes scenes that feel authentic and lived-in, they can also feel static. Though the brevity of most tracks suggests that there’s not much time to go anywhere - and sometimes it does seem they pass just a little too quickly - doubling or tripling the time does not add like value, mostly because similar techniques are used in similar ways from beginning to end. And while the quartet demonstrates commendable control of time and space, and there are moments of building volume and density, less linear and more diverse dynamics would supply some development for the longer tracks. But, Unearth is still a special listen, dreamy and visual, emotive. If clustered on a mood board, it might fit with the sound of Boxhead Ensemble, Rachel’s, Penguin Cafe Orchestra, and early Brokeback better than groups more firmly rooted in the spheres of jazz or classical - great improvised chamber rock for films, though judiciously sparser.

Unearth is available on CD and digitally.