Composer and percussionist Sarah Hennies builds steam with each passing year. I cover three commissioned works for small ensembles across two releases here but 2020 also saw the release of the commissioned Primers from piano/percussion quartet Yarn/Wire, percussionist Andy Meyerson’s performance of a few pieces on Extra Time , cellist Judith Hamann’s performance of Loss , solo percussion pieces performed by Hennies in Habitat , Waylaid , and Bed of Nails (the latter of which was commissioned for AMPLIFY 2020 ), a duo of the composer with Meridian bandmate Tim Feeney on Foragers , and a new performance of Fleas on Live Fleas, April 19, 201 9 with Hennies accompanied by a small bell choir. And I’m probably missing something. It would not be an exaggeration to call Hennies one of the most rousing composers in music right now, and her work released in 2020 is proof enough. The pieces here explore two concepts the composer frequently addresses, strain or failure and intimacy. 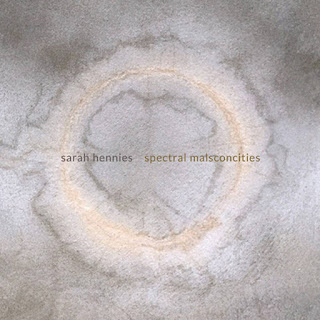 Spectral Malsconcities collects two pieces performed by two different ensembles. I think both pieces play with failure. On Hennies’ Loss, the performer is instructed to hum beyond their vocal range. On Falsetto, extended durations of repetitive soundings induce performance exhaustion. “Kisses” from Extra Time pushes a percussionist’s limb independence to the limit with four varying tempos, and they also have to toss objects into a bucket at increasing distances . This forced failure crumbles traditional virtuosity which, especially for a percussionist, might equate to dismantling normative ways of playing and part of the masculine identity of the drums . The liners of Music for Cello and Humming cast the transformative nature of failure, in which a performer must adapt to a new normal of incorporating their failures, as queer identity, because there is no longer right or wrong, binary sound, just sound. And the realism of Hennies’ more dramatic pieces might be made more real by the small frustrations and failures of the instrumental personae. Hennies composes for failure, and some of her explicit concerns in music - of queer & trans identity, intimacy, love, and psychoacoustics - are stronger for it. But what happens when something expected to fail doesn’t? The two half-hour pieces on Spectral Malsconcities explore failed failure.

“Spectral Malsconcities” is six diverse sections of contrapuntal polyrhythms performed by Bearthoven, which is Karl Larson on piano, Pat Swoboda on contrabass, and Matt Evans on percussion. The complexity of the composition implicitly intends the musicians to falter, but Bearthoven doesn’t. The result is an angular, off-kilter music that is surprisingly tight and steady. The first five minutes is simply the best music I’ve heard in a long time. The tenderly woven lyricism of it sounds like a rhythm Marion Brown might have composed, with a slight swing from the phasing bass and piano phrases (bass - piano - piano - bass - bass - piano - piano - bass - bass....). Each section lasts about five minutes, though some facet of the music from the previous section often lingers. Beyond evolving timbral and rhythmic material, sections are separated by silences or quieter, textural playing or nothing at all, with abrupt transitions. Almost as heavenly as the first section is the third, in which the piano plays a destabilized circus tune that transmogrifies into a nearly familiar lullaby before gradually disintegrating to a single hammered note, backed by quacking strings and four-on-the-floor bass drum. With some other particularly memorable moments in a rewinded contrabass growl in the fourth, or the single piano notes left to hang in the air, vibrating its neighboring strings in the last minutes of the last section. Beyond the conceptual, “Spectral Malsconcities” flexes the rhythmic and timbral skills of the composer and performers to create an addictively listenable experimental music.

In music, tension often breaks. The tempo slows back down, the density decreases again, volume returns to a baseline, cacophony relinquishes to melody. “Unsettle,” performed by pianist David Friend and percussionist Bill Solomon - or Bent Duo, doesn’t really allow that to happen. It is a slow build of single, gentle piano notes first left to hang in the air, with chromatic vibrations of adjacent piano strings suspended in the gossamer ectoplasm of metallophone resonance. To a hammered note, whose residuals clash with percussive overtones like chaotic splashing in the corner of a pool, to the point that it sounds like digital distortion to the brain. Abruptly shifting to a one note piano march towards a din of bells close to the end of the track. There should be tension release, as the tempo, density, and volume decreases and the ears are surely relieved of the simultaneously wondrous and absolutely tortuous noise between minutes 19 and 23, but there’s a recognition that it just begins again.

Spectral Malsconcities is available digitally and on CD. 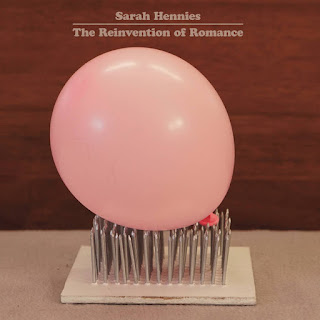 One strain I perceive in Hennies’ work is dramatic pieces, coaxing narratives from a non-narrative music in which the listener perceives the timbral and spatial relationships of instrumentation as action between the dramatis personae of the instruments. This is achieved through providing textual context around the piece. In Reservoir 1 , the traumatized unconscious of a percussion trio quite literally beats small behavioral manifestations into the conscious of the piano. In The Reinvention of Romance, performed by Ashlee Booth and Adam Lion - or Two-Way Street, cello and percussion “[examine] the care and empathy that emerge when two lives share space.”

The single hour and a half performance is spacious. Diverse in techniques and timbres but deliberate in time, giving the sense that it takes time to develop whatever intimacy the instruments do display. Sometimes they play together; sometimes they do not. Sometimes one timbre mimics the other; sometimes they are dissonant. One might play something new while the other continues on the same course. Percussive pizzicato cello might seem sympathetic to the other instrument, and sustained bowed metallophone too. They are more often in phase with each other but just as comfortable out, giving a very human sense that sometimes a mark of intimacy is being just as comfortable doing your own thing, knowing that the other person will always be there when you return. Within the last fifteen minutes, the silence between the two decreases, their pulses speed up, and they eventually resonate together in a throbbing climax. It could be interpreted as erotic love, but also the ecstatic resonance of two platonic souls. Beyond the dramatic personification of intimacy, the sound itself is intimate, recorded closely, with the spacious composition allowing you to spend time with and in each sound.

I acknowledge that a lot of what we might evaluate music on is extramusical, but the success of this music can feel crutched by the narrative outside of the music. Maybe that’s more an indicator of how attractive a narrative is to our brains, given just a crumb of information. Particularly during a time in which the narrative of this music might appear similar to the narrative of quarantined couples suddenly sharing more time and space with each other in 2020, prodded to develop an intimacy which might not have been present previously (though this was recorded in 2019). But even without the narrative, The Reinvention of Romance is a series of timbrally rich duo impressions framed with enough silence to let the sounds really live. It is a celebration of sounds, and their relationships, worth getting intimate with.

The Reinvention of Romance is available digitally and on LP.