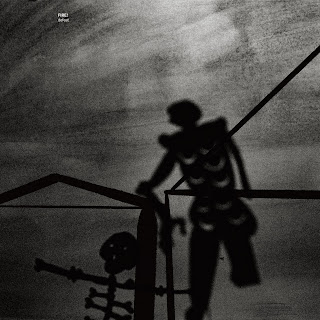 Gustafsson leaves aside the tenor saxophone and the bass saxophone, which played a major role in the sound of Fire!’s last album The Hands (Rune Grammofon, 2018), and focuses on the flute, his first instrument, as he did on the recent album from The Underflow trio (with trumpeter Rob Mazurek and guitarist David Grubbs, Instant Opaque Evening, Blue Chopsticks, 2021), the baritone saxophone and electronics. The addition of trumpeter Goran Kajfeš (who plays quarter-tone trumpet) and trombonist and sousaphone player Mats Äleklint, both played in Fire! Orchestra, color the tight, rhythmic interplay of Fire! with layered horn arrangements, done by Aleklint.

The atmosphere of Defeat, recorded in October 2019 and February 2020 at the Village Recording in Copenhagen, is clearly more reserved, even gentle and lyrical than of Fire!’s previous albums, close to the one of Instant Opaque Evening, which was recorded in the same period of time. Gustafsson’s expressive and ornamental approach on the flute opens up the new pieces and allows the rhythm section of Berthling and Werlin to patiently cook more nuanced hypnotic pulses. Kajfeš and Äleklint expand the rhythmic spectrum of Fire! With their clever playful interplay with Gustafsson, especially on the opening “A Random Belt. Rats You Out”.

“Each Millimeter Of The Toad” begins with Gustafsson’s raw electronics noises and his expressive talking-singing with the flute, but soon surrenders to the subdued yet sensual groove of Berthling and Werliin, a typical charismatic baritone saxophone solo of Gustafsson and call-and-response game with Kajfeš and Äleklint. Werliin and Berthling lay a tribal pulse for “Defeat (Only Further Apart)”, triggering Gustafsson, Kajfeš and Äleklint abstraction of this addictive groove. The last piece, “Alien (To My Feet)” is the most melancholic and unsettling piece here. Gustafsson’s contemplative, lyrical tone on the baritone saxophone and later on the flute fits perfectly the open, sparse rhythmic patterns of Berthling and Werliin.

Defeated again, this time not by Fire! Sheer power but by its surprising fresh, reserved and still highly seductive approach.