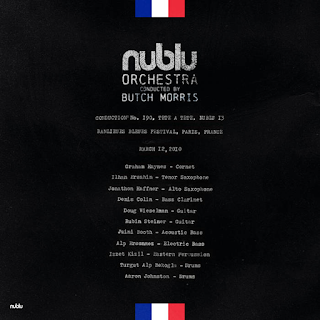 The fact that this recording opens up with the sort of skribbly-BLAT-blat that has been a free jazz cri de coeur since the Art Ensemble of Chicago’s Nice Guys is very charming. This recording by the Nublu Orchestra conducted by Butch Morris, like that 1979 classic, begins in Skronk Town, but that’s the launch, not the destination. They get back there, occasionally, but only after traveling through other city and landscapes.

Live in Paris is one of six in a series (the others are Rome, Lisbon, Sao Paulo, Skopje, and Bergamo), and I’ve been listening to the lot for weeks, trying to figure out what the salient points are that I should report on. Rather than running through the whole series, piece by piece, I’ve decided to focus on one of the recordings as an exemplar of the set.I’ve picked Paris because it’s my favorite, but I want to be clear that part of the joy of the Nublu Orchestra and Morris’ conductions is feeling them unfold over the long periods of time that these concerts allow. You should listen to all of them, spend a week or two in their space.

For those not familiar with Butch Morris and his “conductions,” they are a form of musical creation in which Morris “plays” the orchestra as an improvising instrument. The players are all improvising, but they are doing so according to his gestures and instructions. Some gestures indicate tempo or attack or groupings of players and that sort of logistical thing. Other gestures might mean something along the line of, “Did you hear what she just played? Build on that!” It’s more complicated and subtle than I could ever convey, so here’s a video of Morris — who died in 2013 — talking about it himself.

I am reminded of a conversation I had with Tom Cora way back when. He was explaining why he chose the cello as his instrument over all the others, and he said, “More than any of the other instruments, with the cello you can completely shape the envelope of the sound.” It wasn’t just playing the music, but sculpting the sound. I get that sense with Nublu. Morris’ conduction is “shaping the envelope” of the orchestra in the moment, in a way that no composer or band chart could. In the video above he tells the story of asking his conducting teacher, “What if I want the orchestra to go back to the beginning?” Her response was, “If the composer wanted you to go back at that point, they would have written it that way.” This is as true for jazz scores as it is for orchestral scores. It doesn’t matter how many holes you leave for soloists, they may be responding to the band, but the band is not responding to them. Morris has found a way to make it work.

Live in Paris starts with the skribbly-BLAT-blat, as I said, and then moves on to other spaces. The first part of the evening, a 27 minute, in-the-moment arrangement, leans heavily on the two electric guitars (interestingly, the other instrument that Tom Cora said had a “shapeable” envelope). In the first minutes, the ambient hum of the amps can be heard, which creates a textured palette for the rest of the band — like high quality paper for a pen and ink artist. There are some quiet, swelling moments, like the musicians are having conversations with one another, sounding each other out. Then we move through an hour of story and drama. It’s an N act structure.

To individually cite improvisers seems besides the point. Every player here is made brilliant. There are declarations, arguments, and pleas, but no solos, as such. Voices rise to the top as they might at any gathering led by a brilliant facilitator. In any conversation or any landscape, nothing exists except in context, which Morris directs. There are bits of this that “sound like” reggae, or avant jazz, or Bitches Brew, or jam bands — but it all fits because it all emerges organic from the band, with Morris’ direction, in the moment, then the next moment, one after the next.

I saw Morris perform 30 (or so) years ago, and there was a bit of a spectacle to watching him do this. It seemed almost like an extended magic trick. I was young — how does it work out to be something unified and coherent? The sense of spectacle, for me, has long ago passed, but my sense of awe and gratitude at what Morris is able to bring together into all of these recordings is abiding.