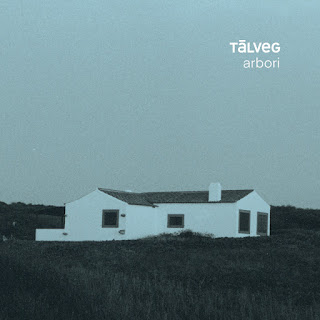 Tàlveg is the trio of Marcel·lí Bayer on baritone saxophone, Ferran Fages on electric guitar and Oriol Roca on drums. The instrumentation allows you to think, as a first impression, that the bulk of Arbori (which translates as arboreal actually) consists of power music, noisy, loud stuff. This isn’t the case here.

Fages’ discography (as he is the only one of the three I’m quite familiar with) involves experimentation with small scale, very often amplified sounds. Quite minimal, like small gestures, they come as improvisational suggestions but always stay on the experimental side of the spectrum. While listening to Arbori, a ten piece oratorio as they call it, I got the impression that Fages’ electric guitar is the core of Tàlveg, the instrument that suggests and leads (but not in the conventional way) the direction of the trio.

To finalize my initial argument, Arbori is not made up from dynamic sounds but, rather on the same way of thinking with Fages earlier recordings, they focus on small scale improvisation. The baritone sax of Bayer, an instrument that by definition can dominate a recording (yes, I have Mats Gustafsson on my mind…), is a gentle presence on his hands. On the longer tracks of Arbori, there are moments when he and Roca play as a duo, forming a unity that is quite thrilling and enjoyable. Roca’s drums follow and lead at the same time, but he is not just keeping the rhythm. I felt that he also has a very clear bond with Fages metallic notes, clangs, sounds –everything he produces from his electric guitar.

I got fascinated by the very few times they let themselves get carried from the energy of the music. In tracks like Gosurc, they slowly build up on the tempo but never let go on a burst of energy. It seems like they could do that forever, such is their controlled pathos. Arbori as an oratorio is quite playful, consisting of four long tracks while all the others are smaller snippets, like small sketches of experimentation on their way to paint the bigger picture. Thinking that Arbori is their first full album as Tàlveg, the listener gets the feeling of urgency and importance. I felt really at ease with this feeling as I too needed (and need) music that will transcend my feelings out of this global dystopia.