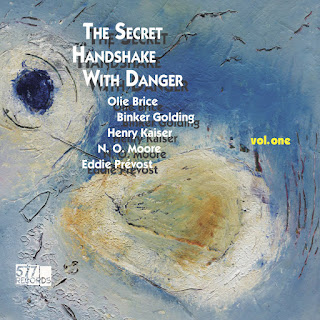 577 Records is an independent record label based in New York City, operating since 2001. Daniel Carter and Federico Ughi met soon after the latter's arrival in New York from Italy in 2000, via a brief stay in London. The pair began a series of concerts at 577 Fifth Avenue in Brooklyn. The quality of the artists they found willing to contribute to these events inspired them to diversify and extend their range, and 577 records came into being. They have since added two side shoots; Orbit577 which showcases a catalogue of digital albums and Positive Elevation - a sub-label dedicated to experimental electronic sounds. Their support of improvised music and their mission, together with Carter's 70th birthday, led to the inaugural Forward Festival which has, since 2015 been a fixture of the NYC scene and features a diverse line-up. The label supports musicians directly with 100 per cent of profits from most albums going to the musicians who make the label a success.

The album's two extended tracks are mostly spontaneous composition, though influences from Miles Davis' On The Corner electro-jazz era are evident. The tracks were recorded and mixed in a single day in a Westpoint London studio, hours before the U.K. official national lockdown.

There are just two tracks; the first ' Door 1' is 22 and a half minutes of improvisation, opening with a heavy bass and drum dialogue, into which the sax drops like a rabid dervish in a rapid, feverish complimentary sidetrack. This expands the interactions and fits neatly in between the ranges covered by bass and guitar. The guitar entrance foretells the creation of a screaming, raunchy top-out track of its own, which, picking up on the hidden rhythmic depths, the sax lifts, whilst masterfully switching the centre of attention to the sax line.

The sax is left largely on its own over quieter percussion and guitar for a short while before bass rejoins and offer its own countering voice before a delightful drum-led section around the seven-minute mark. The track flits hereon in from powerful, steely electronic guitar to a gentler underflow from sax before the guitar retakes the impetus. The bass emerges with a beautiful solo in a brief interlude before the rest of the ensemble rejoin, first gently, steadily and then with added emphasis and dynamic flow.

Repeated motifs from the saxophone provide a basis for the rest to roll over for a half minute before a more surreal section evolves. The little trickity section at the 18-minute mark between guitar, sax and drums is an earful of delight before the pace increases again, and the energy diverts to a helter-skelter trip to the end of the track.

The track includes some sections played disorienting speeds alongside exhilarating rhythms, navigating the confusion with confidence and trust. It is the rhythm patters which often predict a change in feeling, subtly yet with confidence. Given the ensuing lockdown where musicians' gatherings would be denied them, the music's sense of urgency is ever more appropriate.

'Door 2' has a gentler, ethereal start with warpy electronica and spacey noises. Soon the percussion gets a little busier, and the rest follow, adding their voices. The sax introduces a theme which wavers for a while, before being taken over and morphed by the ensemble into a different sound. The track is sax-led for a major portion, but the bass and drums' importance are not lost to the listener, and the guitars have the knack of finding the missing notes and slotting them in just-so. A different door this track but ultimately one that leads to the same place - improvised sounds which both make sense and feel right. The crazy guitars section is wonderful, and the ensuing dynamism from the drums numbingly beautiful.

This recording is a wonderfully amorphous dialogue which is unpredictable, yet somehow it comes together in ways which make it feel comprehensive and entire. The dynamism and energy never wavers, making it uplifting and a substantial recording, demonstrating the true art of improvisation.

On 577, I asked both Daniel Carter and Federico Ughi if they could sum up their thoughts.

Carter says, "577 Records is uniquely visionary, all about freedom of musical expression, and fairness to and respect for musicians, being straight-up honest with them. If 577 weren't about encouraging freedom of musical expression, it would make me nervous, and worse than nervous. I've no doubt been spoiled like a spoiled child, but mind you, in a divine way, by this record company, because it never gets in my way. It always encourages me to play the way I feel. It encourages me to meet my maker, i.e., face my own deepest, highest, inner being, with all its shortcomings, as well as strengths, encourages me to head out directly for the divine spark, which is deep inside every human being. 577 gives me way more than enough rope to hang myself, if I'm foolish enough to do that, and unfortunately, sometimes I am. But sometimes, I'm actually less foolish, to allow the encouragement of the spirit of the musicians I play with, and the spirit of 577 Records, to enable me to arrive in "musical and life places", I would never have believed possible, before I met Federico Ughi, who, around two decades ago, not only founded 577 Records, but he's also one of my very favourite drummers. While in New York, I've played with him more than with any other drummer) Such a wide and deep range of sounds he makes on the drums, and all with the Federico Ughi soul and personality, transcending musical genres, but also demonstrating an astute knowledge of and feel for each and all of them. By the way, all these are also the musical traits and character of 577 Records, itself, already two decades in the running, but shooting for further unbelievably amazing horizons. Believe it or not, I'm actually trying here not to gush in my praise for 577's accomplishments and visions for the immediate future and beyond. All that being said, of additional primary importance, is how Federico consistently sets a wicked pace in the area of being a true friend, willing to go all out for a friend. He's a person of high moral character, integrity, wisdom, charitableness from the heart, devoted, committed to his family. I truly don't know how he does it all. I am deeply thankful to him for all that he has given and continues to give to me, which has been indispensable in this miraculous, yes, but all too often punishing world, just putting it mildly. For me, 577 Records, from its inception, has constantly renewed my hope, courage, confidence, stability, and vision, and continues to do so, for which, I remain eternally grateful."

I asked Ughi about the importance of improvised music. He said, "Why is it important to create and support improvised, creative, abstract music? When I was 14-years old, I wanted to get a tattoo. So I went to the tattoo parlour where my friend Alberto worked. I was not sure what to get. Alberto gave me one of the most important pieces of advice I ever received: go for something abstract, so if things change around you, you can be free to look at something abstract in a different way and make it whatever works for you at that specific moment. This is how I perceive the improvised, creative, abstract music we produce and support at 577 Records and why I believe these sounds are forever.

577 Records will celebrate 20 years of operations in 2021. Everybody involved in 577 Records has a role: the musicians, the graphic designers, the audio engineers, the writers, the record stores. I am so grateful to have been blessed with such a strong team throughout the years. A special thanks to Daniel Carter, the instigator, the one who created the community, the spark and the theory this project is based upon. "

With these thoughts in mind, re-heard the tracks. Elements of 'Trane, Davis and Sharrock can be heard, whilst improvisers like Vandermark and Parker would not feel out of sorts in the musical landscapes created by the ensemble. There is introspection, spirituality, coupled with a sharing of and profound understanding of sound.

No words adequately describe that feeling when music does its thing, and improvisers can somehow provide just the right notes, in the right places - and in the proper order. 577 encourages musicians to do that and allows them the freedom to work out whatever it is they are chasing musically. The result is simply great music. There is to be a Volume Two released at a later date.