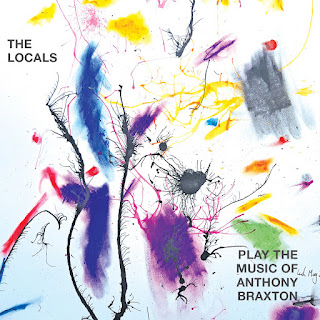 The ability of a composition to exist in different genres, versions, or permutations is, to me, evidence of its power, and, more than anyone, I think Anthony Braxton baked this idea into his mix. Listening to the early recordings of Braxton (mainly the Arista records, which is where most of the tunes on this album come from) has been one of the great joys of my life, but following him for the past forty years, I know that he is more than the sound of his recordings. Braxton has developed the idea of “trans-idiomatic” music, i.e., music that exists across boundaries. Not in the surface po-mo sense, more eclectic than thou, playing a quilt of genres very quickly. Or even making a “wide variety” of music over the course of a career.

Braxton’s compositions are trans-idiomatic in the sense that they conform to no particular idiom or aesthetic, and thus, can be made to work in all of them. For example, the Braxton album, Five Pieces 1975, really is a jazz album (go figure), with bass, drums, horns. And while a tune like “23g” to me sounds like a post bop free jazz tune, there is nothing in the composition that requires it to do so. The structures, insinuations, and improvocations written into the score don’t require that it come out “jazz like.” There’s nothing in the score of a Braxton tune that even requires them to be Braxton-esque.

Pat Thomas has taken these Braxton compositions and arranged them for his band, The Locals, and has come out with something that brings out all of the joy, power, invention, and intrigue of Braxton’s music, without sounding Braxton-esque. The band (Thomas on piano and melodica, Alex Ward on clarinet, Evan Thomas electric guitar, Dominic Lash, electric bass, and Darren Hasson-Davis, drums) is wearing a downtown funk hat, with wonderful, repetitious bass and drum lines that are deeply in a groove. The backbeat keeps calling attention to itself, not because it’s intrusive, but because it never occurred to me how well Braxton structures would work with a backbeat. Pat Thomas’s piano operates at the level of a very energetic Don Pullen. Falling down onto the rhythm with a quality of strained mercy (like the rain), while Evan Thomas’s guitar is the broad brush that ties it all together, connecting the levels and making it all so plausible. Ward finds himself cast, inevitably, into the Braxton role, but he is not merely Braxton-ing. The compositions, and Braxton’s ethic, wouldn’t allow that. Ward’s stories and attacks are his own and I love the heck out of them (until there is no heck left, at all).

Aside from being an amazing good time — really, fave album so far this year — this album is a gift of vision. Like seeing a geographic feature from a new angle for the first time, you gain insight into not only what it looks like but how it exists in the world in three dimensions. I feel like I know more about 23g (and 6i and 40b etc.) than I did before and know more about the experience of them. I created a Spotify list of Braxton’s performances of these pieces , in the running order of the Local’s recording [1] . It is fascinating listening to them side by side and discerning what Braxton and the composition demanded, and where there was space was left for the musician to be (not where you would necessarily expect); where things are emphasized (funk floor foil to the piano and clarinet), and others de-emphasized (not so many of those long, sinewy, winding melodies played in glorious, obsessive unison).

So, just to sum up: fascinating, amazing good time.

I really like the sound of this one - has an air of the free funk excursions of Coleman and Shannon Jackson about it!

Good to see Pat Thomas getting some love. Too underrated for too long.