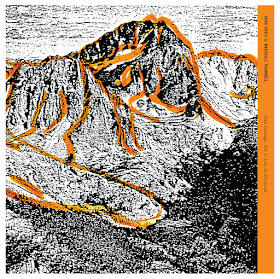 Duo Damage continues SIGE’s documentation of drummer Marshall Trammell’s collaborations with various guitarists, after Untitleable with William Fowler Collins and Experimental Love I & II with Aaron Turner, both from 2020, and of course Trammell’s longstanding duo with Zachary James Watkins in Black Spirituals . And of course, guitarist Tashi Dorji might be best known for his longstanding duos with drummer Tyler Damon and Thom Nguyen. While Collins, Turner, and Watkins inhabit spectrums of metal and noise not too far from Dorji, none are as devoted to a relentlessly repetitive cadence in their attack. While Damon and Nguyen are both hecatoncheires, able to cover the whole kit and fast, Trammell’s focused approach, centered on bass drum and cymbals with bursts of rapid repetition on one part of it, provide a particularly driving pulse. So, though a familiar format for both, each offers the other a rhythmic momentum not often heard in their other guitar/drum duos.

Duo Damage is a half-hour set from January 2019 divided into two tracks. It follows the idiom of improvised performance in that it is a collage of themes glued by slowed moments as the musicians reset and lock back into each other. However, it is consistently loud, consistently noisy, and the shifting beat never stops, sustained by bass drum carpet bombings, a crackling morse code, chiming chords, or something else. Out of a constant chug from a menagerie of riffage slither out feedback solos and pulses. Joined by the spirit of Ayler’s drummers, in Sunny Murray’s sustained cymbalwork and Beaver Harris’ jimmy leg, with bass drum flutterings and lurching low end like dub techno, and moments of just beating the hell out of the tom, or the snare. The whole set is frenzied and their styles seemingly compatible without consideration, but they communicate through density, volume, and pulse.

Despite the conservative personal rating, this is a stunning pairing highly recommended for fans of the musicians and I consider it among the most compelling recordings from either of them.

At the time of writing, Duo Damage, Vol 1: Live in Portland is a digital-only release, but should be available on cassette in the future.