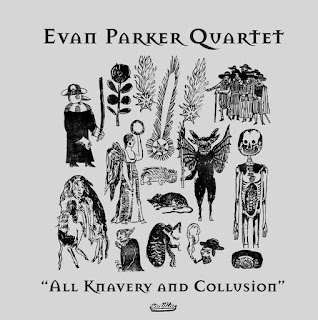 
Evan Parker has been a fixture on the UK jazz scene for many years. His original delivery makes him distinctive, and his support for fellow musicians is well known. His monthly gig at the Vortex Jazz Club in Dalston has become a more or less permanent fixture and serves to demonstrate Parker's close ties with the fragile ecosystem of clubs that support the jazz world; the small venues that allow an intimate and powerful connection between the artist and audience that is at the heart of jazz creativity.

The gigs have included work with John Edwards on bass, the late, great John Russell on guitar and other musicians. John Edwards told me once that playing as a group with Evan is like being part of a team - each musician catches the others. On this album, Parker is with Paul Lytton (percussion), John Edwards (double bass) and Alexander Hawkins (piano), who came together for a gig at the Vortex on June 20th 2019. The album was recorded the next day in Rimshot, Kent. The subsequent mastering and producing of the album coincided with the first Covid lockdown.

The last time I saw Parker with Edwards and Russell, there was some amusement because I had got myself invited to two gigs - one at the Vortex and one at nearby Cafe Oto to see another musician. I left early to go to the Oto gig but returned shortly afterwards. As we walked back in, Evan grinned and said, 'I knew you would be back.'

The album starts with 'All Knavery and Collusion', which sees sax, piano and percussion gently feeling their way along musical pathways as yet undecided before there is a sudden alteration in direction and the sax leads in melodic phrases, to which the response is punctuated with rhetorical phrasing from the piano and drums whilst Edward's double bass adds filling. The melodious meanderings of the sax create cohesion and direction whilst, on occasion, the piano's sharp, transient reaction creates dramatic contrast, particularly in the final third where staccato notes puncture the phrases before the final phrases where the piano and sax reflect each others' motifs.

'The Alchemy of John Edwards' is aptly named as Edwards and his bass take the listener in many directions. From warping strings to percussive drumming on the frame to the deft plucking of strings and intricate and delicate combinations, the double bass proves a versatile fiend. The piano, sax and percussion interlace the bass with their voices and the track develops into a slightly chaotic free for all before the bass voice emerges and the ensemble duly follows its lead. The quieter interludes on this track are a joy because they create moments of stillness into which drops either sax, drums, or, more often, the deeply resonant bowed bass. Edwards is the alchemist, but the others provide the ingredients he brings together.

'A Well staring At the Sky' begins with Parker's sax dictating the rapid-fire tone in a series of well-worked phrases before the bass adds deep undertones, with piano and percussion joining to provide more layers. Short but very sweet.

'The Influence of The Dog Star' is atmospheric and a series of silences punctuated by bass and later percussion before the piano adds rivulets of sounds. The bass responds with contrasting growly phrases. The intensity builds as the track progresses, and additional colours and layers are woven in. The use of silence on this track is creative, and entries are instinctively timed.

'A Blazing Star or Comet' continues the atmospheric tone, this time with piano leading the way with a series of chords and runs, interspersed with reflective reactions from sax, bass and percussion, which increases the volume in the second part of the track, to which the piano and other instruments respond until the whole ensemble is united in travelling together for a while before the piano emerges trinkling across the top and we are led gently back to solid ground.

'The Weather Set in Hot' is the highlight of the album, with just over 24 minutes of exemplar improvisation and connection between the musicians. At times the piano leads with sax gently adding its voice over in-fill of bass and percussion, whilst at others, the bass offers a characterful interlude. At times the sense of 'let's wander this path for a while, see where it leads us' is strong, whilst at others, one of the instruments leads, and the rest follow. The diversions are many, but the return to the harmonic path is always a possibility. The middle section is a delight, with the ensemble interacting and bouncing off each other with precision and an almost ecstatic delight. Parker delivers a lengthy solo that is both rapid-fire and beautifully textured. The piano and percussion gently ease their way in, and bass joins to create another ensemble section before the piano solos, delivering rivulets of rolling, interweaving notes before the percussion picks up the off beat, and the bass adds its voice with Parker rejoining. The sense of abandonment at the ending is just beautiful.

'Art Is A Science' closes out the album. It is led initially by piano chords over a repeating top note before the phrases become more complex and the percussion and bass join to create an almost delicate finale to the album.

This album is a joyous listen, and hearing four such natural improvisers engaging with each other closely yet retaining the individual voice of their own instrument and their characters is a wonderful thing to hear.

One of the thoughts that come to my mind when thinking about buying another release from one of the (deservedly called) giants of free jazz/free improv is why add another to the allready big existing catalogue? I do not have a particular strong answer, no other than that: if it sounds really good, then its worth it.
This one sounds really good, a mixture of three different generations of improvisers as well//

Still pre-release on Bandcamp despite the release date passing....

These guys must be crazy, my mum used to say, back in the days when I was listening to freejazz at loud volume. Having read the interview with Evan Parker in the april issue of jazzwise, my mum was not all that wrong, apparently...