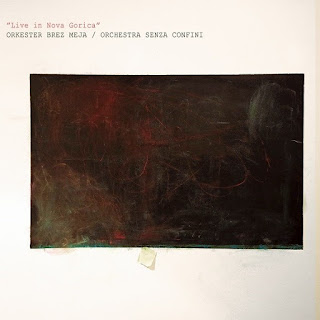 For all of us who favor improvisation instead of composition, who prefer an egalitarian non-hierarchical music, it’s easy to forget that there is plenty good music outside the aforementioned parameters. Improvisation might be (to quote Derek Bailey a little bit) at the core of all musical traditions, especially the non-western ones, but it is not the only way to go forward and progress. Thankfully it is not.

The Live In Nova Gorica CD is mostly made of improvisations but the twenty musicians involved (check on the link below for details) are following the orders from their conductors, Giovanni Meier and Zlatko Kaučič. This CD, recorded late summer of 2018, was a celebration of Kaučič’s career spanning four decades. To maybe find a point of reference, one might say that Evan Parker's Electro-Acoustic Ensemble come first to mind. But this orchestra of twenty people is much more than just a sparse (this is their third cd in six years) gathering of musicians that follow paths opened up by others.

Twenty people playing music all together give the listener the opportunity of a variety of instruments and timbres. Probably it is the conductors will, so the cd, fifty four minutes as one long track, seems to follow a narrative. It is built in a way that music who accompanies films or children’s stories is made of. Quite fascinating is how the soloists come forth in different combinations, covering different parts of the same musical narration. Of course, one big change from the aforementioned purposeful musics is that parts of Live in Nova Gorica are improvisations.

There are some complex arrangements on this cd, sometimes improvised, many times (I’m guessing here) thought before as compositions –at least the basics of them. Everything is conducted, and, here, it raises my question if all this was rehearsed even a little bit. I would comment that most probably all the musicians got some fundamental instructions on how to proceed.

Nevertheless, the feeling of this live recording is easily captured on this cd and it consists of really-really good music. Music that comes not from a certain area (like improvisation for example) of the musical spectrum but, also, mirroring the musical progress of jazz based music in the 20th century. You will find solace in this music as much as joy, energy and fulfillment. Great stuff.