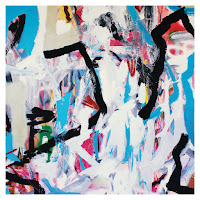 By Stef Gijssels
The Exploding Star Orchestra is one of the many musical faces of Chicagoan composer and cornetist Rob Mazurek. Next to his sober and experimental solo work, he expanded on jazz with his Chicago Underground ensembles and his Brazilian São Paulo Underground adding even more electronics and modern beats.
The Exploding Star Orchestra is one of my favourite ensembles because of its totally unique sound and approach. Mazurek was once thrown off his feet when he heard Sun Ra perform, impressed by the massiveness of the total approach. The space travel imagery may come from that experience too. Add some modern classical music, some Bill Dixon and the Art Ensemble of Chicago and you have some other inspiration. Despite the influences, the Exploding Star Orchestra is its own thing: tightly composed, tightly arranged, grand in its ambition, grand in its themes, compelling in its rhythms, optimistic in its journey through space, full of wonder about the new discoveries, offering at the same time a trip into humanity itself, and finally you can add some jubilant performances by a great band.

The most memorable sounds of the album are Damon Locks' recitation of his texts or poetry that, in its kind of distant and muted sound, almost acts like the Greek choir commenting on the action like in an ancient tragedy. Locks has been part of the Orchestra almost from the beginning, but his impact on this one is more elaborate and more determining. It would have been good to add the texts to the album, and they're also not to be found on the internet, unfortunately. The second most memorable aspect are Nicole Mitchell's beautiful and melodious flute parts, flying high over the complexities of the orchestra, giving the music its signature. There is not much soloing on the album, with the short exception of the guitar or the cornet. This is very much a tight ensemble effort.

Mazurek himself is the real leader, again delivering stellar and complex compositions, with wonderful arrangements guiding the twelvetet on its spectacular and joyful journey through the universe. Some of the compositions will haunt you for many days to follow, such as the incredibly agitated insistent theme of the title track, wonderfully contrasted by the calm single cornet tones. As usual Mazurek's music is beyond categorisation. It's eclectic but then so inventive and creative that it takes its own incomparable genre.

I hope will take many more years before the Exploding Star Orchestra reaches the boundaries of our universe.