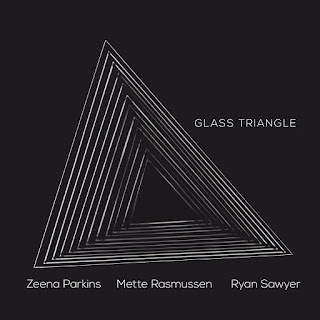 
Glass Triangle offers a new free-improv trio of electrified, voicing strings, breath and bell and horn and drums. New York-based electric harpist Zeena Parkins has performed live with Danish alto sax player Mette Rasmussen a few times in recent years and recorded with fellow, New York-based percussionist Ryan Sawyer as the trio Green Dome (Thinking in Stitches. Case Study, 2019, with keyboards player Ryan Ross Smith), but Glass Triangle - titled after the glass sculptures of Josiah McElheny who contributed the cover art - a glass triangle - and short liner notes to this album, is the first recording of these three musicians together. This album was recorded at Thump Recording Studios in Brooklyn in June 2019.

Parkins’ remarkable, and ever-inventive spectrum of sounds, rarely associated with a conventional harp, is at the center of the intense dynamics of this meeting. Rasmussen suggests the urgent, sharp and ecstatic edge of this trio, always pushing forward, while Sawyer adds like-minded frantic, fast-shifting and fragmented rhythmic patterns, but it is Parkins who cements the syntax of this trio, with her heavily-processed and effects-laden electric harp, but insists on a democratic, conversational interplay. Parkins cleverly crisscrosses the high-octane attacks of Rasmussen and Sawyer on the opening “Begiunners, begges, beattle, belt, believers”, sounding like a twisted electric guitar; she intensifies the mysterious, ritualist atmosphere of “Not Bygone, Just Biggone” with eerie, ambient sounds; and she anchors the nervous energy of Rasmussen and Sawyer on “Flod of Trees” with a storm of alien noises.

Rasmussen experiments with extended breathing techniques and damped tone on “The crystal chain letters” compliment beautifully the ethereal tones of Parkins, and both soar over Sawyer’s powerful drumming. This trio goes extreme as a three-headed wild beast on the brutal “Merlin and the Gleam”, creating tight masses of explosive sounds and noises. The last piece “Melts into surface” surprises with its gentle and contemplative tone, stressing the great affinity of Parkins, Rasmussen and Swayer and their shared commitments to challenge themselves constantly and never surrender to the known and familiar.

McElheny suggests an alternative way of listening to Glass Triangle: “Read closely the new language in the titles of this first movement of Glass Triangle, utter them, enunciate them, out loud. Tickle the tongue, hear the rhythmic tone of your throat echoes: these will introduce you then to the way angles, lines, turns, returns, all crystalline, all vibrating, quiet sometimes, soft never, sharp and sweet, build a mountaintop of sun, ice, fog, rain, snow, sky, light, transmission and cosmic rays”.

Either way, Glass Triangle is an excellent meeting of fearless improvisers who cherish risk-taking. Hopefully, there will be more movements of Glass Triangle.