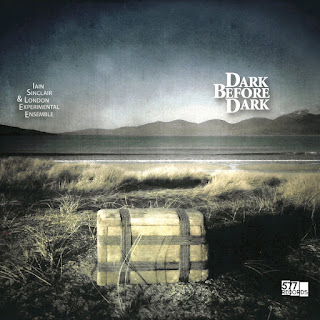 Iain Sinclair’s writing is characterized by inspired leaps, often wringing ranges of inference from localized material. During a long career he has moved through artful fiction to undefinable prose works likeLondon Orbital: A Walk around the M-25,Swimming to Heaven: The Lost Rivers of London or American Smoke, travels in American Beat literature, touching variously on municipal politics, literary history and a personal vision at once acute, occult, arcane, folkloric, cellular and, somehow, of assistance in negotiating the blind alleys and blistering solar flares of contemporaneity. Dark Before Dark has assumed several forms. It began as a short text, subtitled A Brief Account of the Curious Properties and Eccentric Travels of a Whalebone Box (Tangerine Press, 2019), published in a limited edition and now sold out. In 2020 it became material for The Whalebone Box, a free-flowing film, directed by Andrew Kötting, tracing Sinclair’s pilgrimage across England and Scotland. In 2019 Sinclair collaborated with the 13-member London Experimental Ensemble on the performance heard here.

The mysterious box is springboard to an obsessive account of its meaning and history. Made by a Scottish sculptor, the box passes from artwork to mystery, an “animal battery”, a ritual element somehow cursed, a Pandora’s box. It must be carried back to Scotland to be buried on the grounds of a deconsecrated church (“Don’t open the box! Don’t open the box! The horrified cry echoes through the ether.”) It’s Sinclair’s genius to imbue his tale with terror and a simultaneous speculative analysis of the object’s significance. He’s even funny: an incidental 19th century mystic keeps fresh linen and a toothbrush for the returning Christ. In this improvisatory collaboration, Sinclair reads and improvises with the text, moving from straight declamation to fragmenting and repeating its segments and individual phrases. The looming power of the text and its performance mates perfectly with the special gifts of the orchestra. It may be that the transformative, rather than discursive, content of the text makes it particularly apt for collective musical elaboration.

Previously heard in a realization of Cornelius Cardew’s Treatise (Split Rock, 2018) and a radical reading of Child Ballads (Split Rock 2019), the London Experimental Ensemble is made up largely of veteran participants in Eddie Prévost’s long running improvisation workshops. Among the interactive methods practiced there was one in which a group of three or four members of a large grouping collectively improvised, each gradually ceding his or her position so that another musician might take it, creating a continuous improvisation with an ever-shifting band. The group here assumes the same strategy, creating an improvisation that can adjust readily to Sinclair’s episodic participation, while creating moods of almost supernatural eeriness, transforming their instruments’ sounds and blurring metallic and electronic sounds with abrasive string textures. The group avoids the pitfalls that arise accompanying language. Musical phrasing doesn’t get too close to Sinclair’s own, and the group develops its own contours, a kind of loose shroud as fraught with surprise and menace as Sinclair’s own. The tightrope of marrying improvised music to relatively fixed text mirrors the text’s pulsing connection between anecdote and metaphysical dread.

The composition of the group leans heavily to electronics and strings.

The closest listening can sort out their individual contributions, whether it’s a repeated bass smear from Lucas or a similar bowed low note from Muscatello; the electronic maze that might issue from any and all of Hardie-Bick, Ikeda, Kordik and Moore; or the timeless folk whispers of a dobro. Yifeat Ziv’s quiet phonetic vocal sometimes gathers behind Sinclair’s narrative. You might also distinguish the cries and screams of horns, violins and electronics at word of a box that has caused a tear in the fabric of the universe. Surrender. What matters most is in one of Sinclair’s repeated phrases: “the sounds of the world tearing itself apart.” You’ll hear infinitely more by accepting this ensemble’s complex of pooled resources and shared voices than trying to parse individual instruments amid this ideal hive mind. Whether complementing Sinclair’s narrative or creating dense interludes and adjunct commentaries, the London Experimental Ensemble is in the foreground of large-scale collective improvisation.