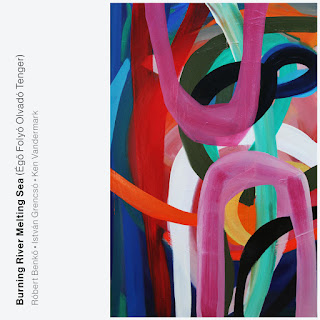 In the waning days of the pre-pandemic world, reeds player and composer Ken Vandermark performed at the 3 Tage Jazz 2020 in Austria (a series connected with the renowned Saalfelden Jazz Festival). There, he played with Hungarian woodwindist István Grencsó with whom he released DO NOT SLAM THE DOOR! on BMC Records in 2019 (the album is a must listen if you haven't already).

The story goes that Vandermark and Grensco visited SuperSize Studio, a recording studio outside of Budapest, after the series of concerts in Saalfelden in January. They recorded both as a duo, on many new compositions, and as well as a trio with Grensco's long time colleague bassist Róbert Benkő. The result is the colorful, abstract, but also firmly rooted, Burning River Melting Sea (Égő Folyó Olvadó Tenger) on the digital only imprint Systems vs. Artifacts of Vandermark's Audiographic Records.

The trio recordings pull from Grensco's deep catalog and they are quite enjoyable. The opening 'Extracted color (Megszűrt szín)' begins with a high speed chase of sorts, both woodwinds - maybe both even Bb clarinets, play abstracted, colorful melodic lines over an insistent pulse from the bass. A later track, 'Rise lonesome (Magányosan kelni),' features the two woodwinds pulling in slightly different directions, one textural and buzzy, the other more melodic, both pushing notes to their breaking points. Meanwhile the bass keeps a calm, diffused pulse going that connects the two. Vandermark and Grensco eventually both break into playful runs, and Benkő joins in with a fitting, bowed response.

However, to quote Vandermark's liner notes, it is the new compositions that he finds particularly exciting: "though it was a pleasure to return to the material that the Collective performed, working on the new compositions was really exhilarating and displayed how far the level of communication between István and me had come. Though our collaborations had been occasional over the two years since first meeting, the creative process we’ve shared has kept accelerating."

The truth of these words are reflected right away in the second tune 'How good it would be ... (De jó lenne ...)' (each title is given both in English and Hungarian). A saxophone introduces a stately, classical melody. It is then soon doubled up (though the reeds are separated into right and left channels, they blend in my bookshelf speaker) and unhurriedly unfold into passages with consequently harmonic moments and counter melodic statements. The gentleness of the weave however does not mean that it is calm. Like most of Vandermark's music, there is at least a subtle urgency that comes through. The follow up track, 'A question of rate (Sebesség kérdése),' is another short vignette, which this time is much more overtly urgent. The two break into simultaneous improvisations that spar and jab, but come back to pre-conceived passages.

One tune that I've come back to several times is the somewhat ephemeral 'Object 2020.' It's a trio effort, but I wonder if it is also a new composition. It begins with a single bass note and gentle, mournful notes from a clarinet. It is not without moving moments, but overall all it seems a bit fraught like the year that followed the recording. Regardless, this is a wonderful and intense release that will draw you back time and time again, revealing new ideas that often feel identifiable, yet never fully recognizable.
Paul on Monday, May 17, 2021
Share

Yeah, I've been listening to this for a few weeks. It really is superb. I knew nothing of the other two musicians and am planning on exploring their other work.

Thanks for pointing out DO NOT SLAM THE DOOR! I've listen to Vandermark for a long time and can't remembered him in a setting like this. Very well done by all.

There was a moment in my Jazz fan journey when I wondered if my interest in avant-garde was a mistake. Is there more here than noise? The Vandermark 5 saved me. If someone recorded KV singing in the shower, I would download it.