By Stef Gijssels
In the fourteen years of our existence, we've reviewed only 15 trumpet-guitar albums. Obviously more albums have been released, but the format is clearly not very common. We're updating you with three new albums.
Tin/Bag - Evening Hawks (Big Ego, 2021) **** 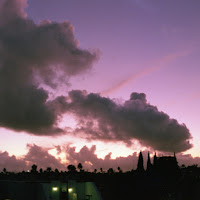 Of those 15 albums, three are by the duo of Kris Tiner and Mike Baggetta. We're happy to present you their fifth album after "There, Just As You Look For It" (2005), "And Begin Again" (2007), "Bridges" (2011), "The Stars Would Be Different" (2015).
Over the years, they have perfected their art of quiet, warm and intimate music. Yes, it is sentimental at times, but that's part of their unassuming and unpretentious approach. They do not intend to change the nature of music, but rather try to perfect the possibilities of great instrumental mastery.
Two of the tracks have been performed before, "The Stars Would Be Different" and "Evening Hawks". They also give their own rendition of "One of Us Cannot Be Wrong" by Leonard Cohen and the country song "Let Me Talk To You", possibly the most sentimental track on the album.
Tiner's compositions are a little more abstract and in my opinion also more powerful.
As mentioned before, this is music for quiet indoor moments, when the weather is cold and unfriendly outside, and all you need is to be enveloped by warm and gentle quality music, as an extra to the blanket and the hearth.
Listen and download from Bandcamp.
Watch them perform one of the album's compositions at a concert in Nashville in 2020.
Jeff Parker & Rob Mazurek ‎– Some Jellyfish Live Forever (RogueArt, re-issue 2021) **** 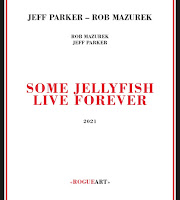 In 2015, this music was released on vinyl only, and reviewed by Paul Acquaro, which led to the comments of not being available in the desired format. Fans can be happy today, because the label re-issued the duo of guitarist Jeff Parker and cornetist Rob Mazurek on CD.
Parker is a precision player, preferring quality of touch and sound, subtlety of phrasing and harmonic changes over speed or volume. Even if four of the five compositions are penned by Mazurek - and recognisably so - the actual tone and voice of the album is really Parker's thing. Mazurek is a master at composing grand themes in unusual rhythms. We do get those, but then in an equally unusual intimate setting. The guitar and the cornet create their joint pieces in a slow, unhurried and deliberate way, letting the music and their instruments resonate quietly, muted, slightly electronically altered at times.
The music was recorded in May 2013. Many fans will be happy that it's available again. The music is more than worth lsitening to.
Staniecki & Jachna - Two Souls (Requiem, 2020) *** 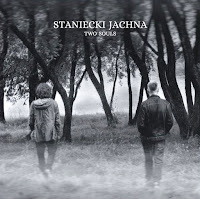 The third album is by Wojciech Jachna on trumpet and loops, and Maciej Staniecki on guitar and loops. We've followed the releases by the trumpeter for years and he should hence not be a stranger to our readers. The guitarist comes from a more rock-influenced electronic and ambient ecosystem. This music is all about atmosphere and mood: quiet, subdued, gentle and very melancholy.
Staniecki's guitar often takes the lead, harmonically, with arpeggio chords, adding inventive crisp additions, with electronic alterations, creating the background for Jachna's lyrical improvisations.
This will not be for the real avant-garde fan, but with this series of trumpet-guitar duos, we're clearly in a more unassuming, friendly and warm environment. For once, this can be enjoyed too.