The pile of recordings to be reviewed grew ever taller. Over the course of the pandemic, as the months wore on, lockdowns come and went, case numbers rose and fell, the recordings, thankfully, kept coming, music kept being made. Some labels turned to digital only release series to keep the output going amid the unknown, some musicians raided their archives, while others used the time to create new works or complete ones long simmering. Many allowed circumstance and practicality to shape their creative processes and turned introspective, creating solo works reflecting the glitch in time. Many kept on keeping on. These are their stories... 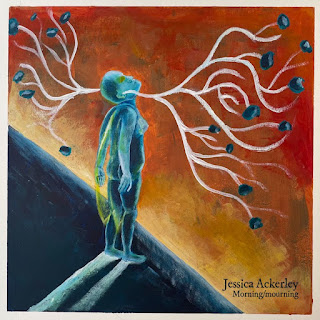 Recorded in NYC during the winter of 2020/21, Jessica Ackerley's Morning/mourning is a rich array of guitar music styles, ranging from deliberate arpeggios to ebullient single-string firecrackers, in other words, a beautiful rush of plink-plonk and tasteful tonal clusters. Morning/mourning is comprised of pieces that Ackerely had been developing over the course of several years, and had even tried recording before, but it was a stint of self-isolation in a borrowed apartment that finally gestated the tracks. The less than optimal conditions for the recording probably led to its successful creation - in order to not disturb the neighbors, Ackerely placed condenser mics directly into her hollow body guitar, while the pick-ups were recorded directly, capturing a very direct, brittle, and effective tone. This intimacy lets each dissonant note of say the first track 'Henry' breath on its own, and emphasizes the percussive pluck of every string on the fast paced 'Conviction.'  The title tracks 'mourning 2' and 'Morning 2'  reflect the theme behind the recording, two of Ackerley's musical mentors passed in recent years, guitarists Vic Juris (2019) and Bobby Cairnes (2020). 'mourning 2' packs a punch, there is an aggressiveness energy at first, resolving towards the ends, while 'Morning 2' seemingly suggests a emerging of new hope and possibility. A beautiful album that captures and transcends the time in which it was made. 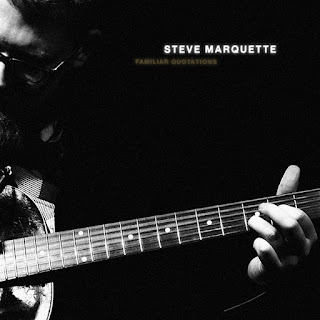 Guitarist Steve Marquette is a part of the avant-folk/jazz trio The Few and Ken Vandermark's Marker, and he steps out solo with Familiar Quotations released last fall. The pandemic also touched this recording, in that Marquette had recorded it to be released on LP, crafting two 20-odd minutes tracks to for the two sides, but circumstances being what they were and LP production dauting, at the urging of Joe McPhee, Marquette went ahead with a digital release. Does the format matter? To my ears, no, what Marquette has created is just as thoughtful, emotive and resonant downloaded from Bandcamp as it would be spinning on my turntable. To my insatiable needs for physical media, well, it is insatiable, so wrong question really.
The first 'side' is the track 'Familiar', which begins by scorching the earth around it. Solo guitar certainly does not only mean clean acoustic sounds, which Marquette highlights with a squelch of distorted tones. After two and a half minutes, however, things change. Teasing out the harmonics and overtones unique to  the electric guitar, Marquette plays with rhythmic, percussive ideas, which eventually develop into more aggressive, scratchier passages. Tones are extracted by bow as well as Marquette digs into other dimensions of the instrument, eventually landing in a contemplative folksy melody and quoting of Allen Toussaint's 'Southern Nights'. Side two is the acoustic one, it begins where the last track left off, in a folkish way. In this track, Marquette connects Joe McPhee's "Astral Spirits" with Albert Ayler's the "Truth Is Marching In". Amid delicate passing tones and blusey riffs, the songs intertwine and connections deepen. An excellent recording embedding the qualities of the guitar with the avant-garde and beyond. 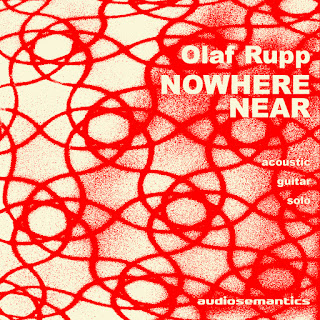 There is something inexplicably satisfying about plucking even a single guitar string - be it on an electric or acoustic. It can be an experience to just pluck one note and let it sound out and then decay. This is even more so with an acoustic nylon string guitar. The sound is rounder, the smoothness of the string belies the wholesome thwak that can be made, or lies in perfect harmony with a gentle strum. Berlin based Olaf Rupp kept busy during the previous months exploring the contours of sound from his nylon string guitar, which he presents on Nowhere Near.
Rupp's approach to the acoustic guitar is rather unique, he plays in a classical manner, often employing flamenco-like flourishes and sweeping picking of the strings. The sounds are lush and encompassing, regardless of the pulse. Listen below to the excerpts from his Bandcamp page, it begins with a mid-tempo exploitation of thick chord clusters, followed then by a side-blowing rain of needling tones, to a percussive explosion of unexpected arpeggios and harmonic extrusions (and there is more!). In fact, as Rupp notes on Bandcamp, "this music is all about sounds. I mean not prepared sounds, no external preparation used other than my hands. It is about granular meta-sounds. Sounds behind the notes." Throughout Nowhere Near, you are as vicariously close to that feeling of playing the guitar as you can get. 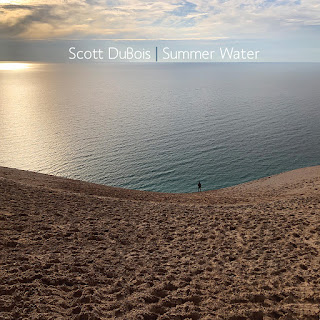 This austere outing from American guitarist Scott Dubois is the third in a series of seasonally inspired recordings. The first two, Winter Light and Autumn Wind featured a quartet with saxophonist Gebhard Ullmann, bassist Thomas Morgan and drummer Kresten Osgood. On Summer Water, however, it is Dubois alone and unadorned. The result is a contemplative reflection of golden hour sunlight glistening on a still lake or the gentle flow of water around and over smoothed rocks in a clear, shallow river.
The opening track, 'Into River Fog' eases us into the album, like we're on a rowboat, slowly paddling into a mist suffused lake. Leading tones pierce the layers of chords, unresolved but resonate, over the sweeping picking of chords. 'River Otters', the following track, is brighter and more up-tempo, the melody is more defined and from our rowboat we can see the playful creatures sliding down a muddy bank. There is a particular sound that Dubois achieves throughout the recording, it is clear, precise and reserved, each note or chordal rings richly. On 'Storm Where the River Meets the Sea,' the power of the tides and flows are captured in a crash of sound at the start and then stretch out languidly, while the 'Sea Before the Storm,' expertly encompasses a building tension. The music is not all mood and tension, there is release as well, as on 'Summer Light on Billowing Sea,' which explodes with fast runs and churning chords. Summer Water is surprisingly onomatopoetic, and Dubois' light flooded sound is the perfect soundtrack for a meditative sojourn. 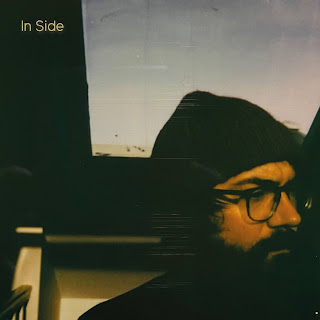 In Side, from Washington D.C. based guitarist Anthony Pirog, begins with the track 'Cloud Forest,' which hangs in the air, thick and atmospheric. Pirog's sound is thick with sustain and reverb, and he overdubs slightly crunchier sounding guitar for his lead voice. The notes cling like elongated drops from the branches above. Like many of the intimate recordings resulting from the restrictions of the pandemic, In Side was born from a sudden realignment of activities. Pirog had been touring and when these activities ceased, he began brushing off songs that had been hanging around, and embarked on a recording. The following 'Dew Drop' is lighter, delving into a Bill Frisell-like sound-world. Moments of folky chords appear between slightly dissonant melodic statements. By the time we reach 'Janel', the fourth track, the melodic side has taken over, and Pirog delivers a gorgeous, lilting ballad. Pirog dives into the Americana world full-heartedly with a rendition of the Patsy Cline tune 'Strange.' The short track towards the album's end 'The Shape of Rain' plays off a Gamelan-like aesthetic and the album resolves with the even shorter, somewhat classical 'Anniversary Theme.'
In Side is very a much a song focused album, it lingers in the corners, in tasteful ephemeral moments, and thoughtfully structured, moody pieces. An excellent solo guitar outing and a nice kick-off for the new AGS Recordings label.
Paul on Saturday, June 05, 2021
Share