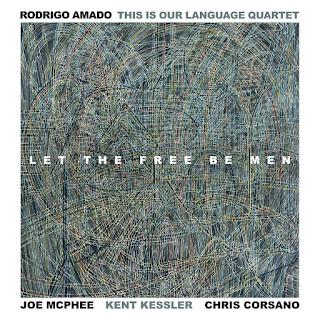 By Paul Acquaro
"Let the Free Be Men" is Lisbon based tenor saxophonist Rodrigo Amado's "This is Our Language" quartet's third outing. It began in 2015 the self-titled album, which was a homage to free jazz pioneer Ornette Coleman, from the mix of the title of two Coleman recordings This Is Our Music from 1961 and In All Languages from 1987, to the similar stellar line-ups. For Coleman's group, it was himself on alto sax, Don Cherry on pocket trumpet, Charlie Haden on bass and Ed Blackwell on drums; and in this quartet, it is Amado on tenor saxophone, Joe McPhee – pocket trumpet and soprano saxophone, Kent Kessler on bass and Chris Corsano on drums. A solid foundation, no doubt, and as excellent as their first and second albums where, this quartet is not one content to rest.

The album begins with 'Resist!' - a defiant title for a track that begins defiantly with a solo drum introduction from the crafty and fascinating Corsano. The upstate New York drummer always works something magical into his playing, and with Amado and McPhee he serves as both a connector and catalyst. Though it is Kessler who joins in first, the two wind instruments waste no time in winding up the intensity. Amado delivers short, powerful melodic lines while McPhee adds exclamation points via the trumpet. At the five minute mark, the saxophone is flying over Kessler and Corsano's insistent rhythm and soon McPhee has rejoined on soprano sax, adding high pitched counter melodies.

The title track is 13-minutes of tension building ecstasy. It begins with a low moan of bass and saxophone and unfolds slowly like an unraveling fern. Starting small and ball-like, the tones expand, becoming interweaving lines, growing at a perfect ratio of melodic intent and free association. About half-way into the track, Kessler and Corsano kick things into higher gear, and here is where the patient unfolding yields to mounting intensity. It does not take long for Amado and McPhee (who is on sax as well here) to be shooting out long, serrated edges of sounds, sounding something like what the primordial fern leaf looks like - ancient, strong, beautiful and hearty, like something that was once food for dinosaurs and nurtures us still.
The next track, 'Men is Woman is Man,' starts with the feel of a buzzing forest. Yes, I'm still stuck here in the nature metaphors, but please bear with me. The insectoid hum turns into more mammalian chatter, with Kessler drawing out short, choppy bowed tones to which McPhee buzzes against with the trumpet. Amado lays back as Corsano adds his unique percussive flair, but then soon begins adding chirps and squawks to the scene. The sounds come together and the forest is abuzz, conversations zipping back and forth, until finally settling down to rest.
"Never Surrender," which closes the recording, seems to be titularly related to the first track, and of course musically related to it all. The track starts off somewhat exploratory but comes together quickly. About four minutes in there is an exchange between Amado and McPhee that is as classic free-jazz as it can be – simultaneously energetic but different approaches that aim for the same purpose, both elevating the tension and tickling the ears.

Language, of course, evolves, rules change with usage, new vocabulary is added, and ever more complex ideas are conceptualized. Between these four seasoned players, their language is all of this, alive, evolving, building and changing. In some sense, this group takes most expressive elements of free jazz - which is indeed a lexical sponge - and wrings out the best words.
Paul on Thursday, July 08, 2021
Share