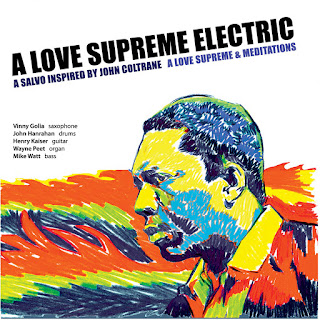 Some genres are defined in part by the wardrobes and props. If it’s hats, horses, and handguns, it’s a Western. If it’s guys in tuxedos playing stringed instruments, it’s what we call classical music. If the dress code is cool and/or casual, rather than formal, and there is at least one horn, it’s probably jazz. The shot of the band that came with A Love Supreme Electric appears to pin it down a bit more precisely. A guitar, bass, and organ all electrified point in the direction of jazz fusion. It’s more complicated than that.

Another difference between classical music and jazz turns on whether the artist and performance are subordinate to the composer and composition or vice versa. Classical fans scan reviews for the best new recording of Beethoven’s violin concerto. Jazz fans look for new recordings by Ken Vandermark.

Occasionally a jazz composition acquires something of the stature of a great symphony or concerto. John Coltrane’s A Love Supreme might be the example. A quick survey turned up twenty-five interpretations of Trane’s 1964 studio version, within a range that includes Carlos Santana and John McLaughlin (1972) and the David Murray Octet (2000). Drummer John Hanrahan writes the first set of liner notes for A Love Supreme Electric. He tells of a long relationship to the music and a sense of spiritual maturation.

This piece (if you’re open and ready to accept) will open your mind to a blissful place of our love and spirit. I’ve seen, heard, and felt it when this piece is performed. I truly had no idea what I was getting involved with.

Coltrane’s studio recording of ALS explicitly documents his religious experience at this point. It is also the definitive statement of his Great Quartet McCoy Tyner, Jimmy Garrison, and Elvin Jones. His Meditations, recorded not quite a year later, documents his leap into free jazz. It also stands as his last recording with the Quartet. Coltrane brought on a second tenor sax Pharoah Sanders and another drummer Rashied Ali. Flying with an unbalanced load into unexplored territory, Tyner, Garrison, and Jones had had enough.

ALSE covers both the four movements of Trane’s ALS and the compositions from Meditations. If that weren’t enough, it deploys an electric guitar and organ. These jazzmen are lacking neither courage nor imagination.

Their most interesting decision was to reengineer Trane’s ALS according to the blueprint of his Meditations. The former, as brilliant and inventive as it is, is well within the comfort zone of any hard bop fan. The first cut on the latter Father, Son, and Holy Ghost would scare a hard bop stalwart (as once I was) back into his mouse hole. Is it really a coincidence that Ayler’s seminal Spiritual Unity was recorded five months before ALS? The result of this reengineering is a much more edgy version of ALS, with a lot of genuinely free jazz, some of them stretched out, in every section.

If that were all there was to it, it would be a much less interesting document; however, two additional strategies enlarge and refine the final product. One was to anchor the more traditional mood of ALS in Vinny Golia’s saxophone. Even when he is trading licks with Henry Kaiser’s guitar, Golia keeps the marrow of bop narration healthy inside the bone of the music. I have always loved it when avant garde/free jazz compositions become kissing cousins with hard bop. Think of Anthony Braxton’s Six Monk’s Compositions and his Charlie Parker Project.

The third innovation was to present the electric instruments less in the style of jazz fusion and more in the style of sixties acid rock. Try to imagine Trane playing with Jimmy Hendrix at, where else, the Newport Jazz Festival. The third time the guitar went off my old earring hole popped open. This is most explicit in Kaiser’s guitar work, but also so in Wayne Peet’s organ.

Perhaps the most evident difference between ALS and ALSE is the lack of empty auditory space in the latter. Trane’s original leaves lots of room around the sound of each instrument, allowing for more definition. This recording frequently fills up all the available space. This might be my only criticism. I would have liked more passages like the beginning of track 8 'Consequences'. Horn, guitar, and bass drill down in parallel shafts.

This is an amazing album. If I only had one track to keep, it would be the last: 'Acknowledgement reprise'. It seems to tie the strengths of the project into a satisfying tapestry. When you get this and you are going to be sure to listen to the Coltrane originals first. Then fasten your seat belts.