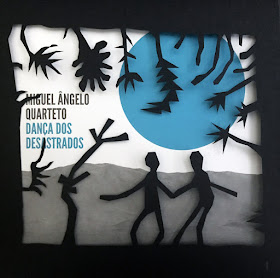 For his fifth release as a leader on the Porta Jazz label, the bassist Miguel Ângelo enlists his frequent collaborators João Guimarães on alto, Joaquim Rodrigues on piano, and Marcos Cavaleiro on drums. He also maintains his preference for program music, in this case, presenting the tracks in three “chapters” relating to the “clumsy” individuals of the title, who are imagined to be performing “possible traditional dances” (the concept is explained—in Portuguese and English—on a website, which also offers a whimsical video game interface for the music).

A fairly brief group improvisation introduces each of the three chapters. “Capítulo I” starts things off, setting a tone of anticipation announced by the piano and sax with some brushwork and bass notes in the background. “Era Uma Vez” then presents an engaging theme that develops into a groove with some tasteful soloing. “Caminho dos Perdidos,” another strong mid-tempo number, offers especially nice interplay between the leader and Rodrigues. The title track closes out the first chapter, with Cavaleiro’s cymbal and snare work cleverly suggesting the clumsy dancing while at the same time driving a clever, knotty solo from Rodgrigues and a lovely, birdlike solo from Guimarães. “Capítulo II” resets the program with a vaguely menacing exchange among the instruments starting with the bass. The two tunes that make up this chapter are somewhat more meditative than those in the first. “Valse do Solitário” moves along in a stately manner buoyed by Guimarães’ gentle tone. In “Soldado Desconhecido,” dynamics and interplay that give the track a cinematic feel. The saxophone starts “Capítulo III” off with a feeling of resolution that animates the closing tracks. The piano and bass join in a lovely duet to open “Vira do Avesso” before the sax and then the drums join in a recurring interlocking melody to convey the “inside out” feeling of the title. “Réquiem do Insignificante” rounds out the set, developing from a languid sax and bass duet into a gentle farewell from the group to the (now presumably weary) dancers.

Dança is a fine example of the benefits of sympathetic musicians playing together over an extended period of time. The members of the quartet clearly appreciate each other and know how to bring Ângelo’s compositions alive. Rather than fiery solos, the group creates and resolves subtle resonances and tensions within the tunes in ways that reward repeated listening. Like all Porta Jazz releases, this recording sounds great; fittingly, the bass is full and distinct whether in a supporting role or soloing, and all four instruments are crisp and well separated. Longish at 54 minutes, this record doesn’t drag but progresses satisfyingly through its three “chapters.” While never sad, the music suggests the themes of uncertainty, loss, and isolation in ways that are both timeless and, unfortunately, timely.