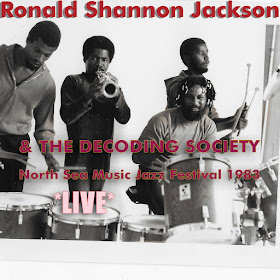 One of the pros, and cons, of digital releases is how quickly some recently discovered sessions, outtakes, or bootlegs can be converted for a proper release. Requisite caveats aside (fidelity, length, detailed credits, and so on), it would be extremely difficult to turn down a gift like the continuing reissue and live recordings project The Decoding Society, dedicated to the music of Ronald Shannon Jackson.

The latest release, an hour-long set from the 1983 North Sea Festival features Jackson’s Decoding Society right in the pocket of its, no pun intended, prime time. Jackson was on an epic run, beginning with Eye On You, Street Priest, and Nasty, his group at the time had just released Mandance and was touring for the legendary Barbeque Dog. Although the credits list a different lineup, it’s actually the same from that album and tour: Jackson on drums and flute, Henry Scott on trumpet, Zane Massey on saxophones, Vernon Reid on guitar and banjo, and Melvin Gibbs and Reverend Bruce Johnson on electric basses. As with his mentors Cecil Taylor and Ornette Coleman, Jackson directs each bass player to fill a different, specific role. And there are jaw-dropping moments, from Masset and Scott’s fiery, synchronized melodic runs, to the opening riffs of “Mother’s Day,” where Johnson and Gibbs play mightily off Jackson, always a metaphorically eight-limbed player.

Many highlights abound, including a high-octane “Iola” leading to “Mystery At Dawn,” where Jackson switches to flute for the melody, and Reid swaps guitar for banjo. There’s a searching quality to the playing, less contemplative more like a beacon lighting a path. The music is meditatively transcendent, like most of Jackson’s playing: the rhythm and melody achieve a kind of harmonic equilibrium, underlining the application of harmolodics as a framework, more than merely one man’s methodology.

Writing in The Washington Post in 1983, Geoffrey Himes remarked, “There has always been an underlying order in the seeming anarchy of Ornette Coleman's melodic jazz. That order, though, has rarely been as evident or as compelling as it was in the show by Ronald Shannon Jackson & the Decoding Society at the 9:30 club Saturday night.” This was in January, and the sextet grew remarkably stronger over the course of that year’s shows. Closing on a lengthy version of “Alice In the Congo,” the opening track off Mandance, the sextet does not hold back. Gibbs, Johnson, and Reid perform an incredible tripartite improvisation, with Jackson smashing cymbals and rolling through epic drum fills.

There is free jazz, and then there is the kind of jazz that demonstrates freeness. Decoding Society always seemed to deliver on the latter. Jackson was a brilliant writer of funky, addictive, and multi-threaded compositions, and the promise of more tapes like these is a wonderful gift.

Also available, a subscription to The Decoding Society