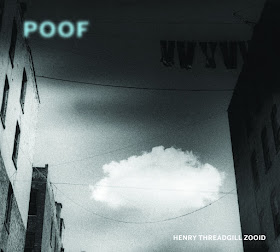 Henry Threadgill has triumphantly returned to present us with another vision of his world: a swirling, expansive set of new compositions with his longest-running group, Zooid.

The last album we heard from Zooid was 2016’s with In For A Penny, In For A Pound, which won a Pulitzer Prize as well as continued acclaim from critics.

The sound of Zooid, 20 years into their existence, has long become something of legend and enigma. It uses an evolving and complex musical system invented by Threadgill, a singular language influenced by his concept of giving certain musical intervals to each member of the group as a launching pad for improvisations and accompaniments (or at least that’s my understanding of it). The result is Zooid unfolding their paths through emotional thematic material and instantaneous melodies in a way that is completely unique to this group.

These melodies, polyphonic and divined by the players themselves, are central to Zooid’s music and in great abundance on Poof. The arrangements here are some of the most nuanced works of Threadgill’s long career. At about half the length of its predecessor, these pieces feel more concise, and all the better for it. The colors in the music exist with more definition: Threadgill’s growling, bluesy sax on the opening track 'Come And Go' burns through the piece to the forefront without singeing the edges that the rest of the band had established, while Jose Davila’s trombone on 'Beneath the Bottom' makes statements through a series of introspections against a sparse, alien backdrop.

One of the most vital parts of Zooid’s music is its shifting nature, in particular the shifting of roles. Though percussion and tuba can be found locked-in to an intimate, central groove at the very start of the record, this inviting groove disappears as quick as it appears, giving each instrument (or pair of instruments) an opportunity to be the featured voice in a concerto or the accompaniment—and often both.

Zooid’s symphonic feeling and organization is continued here, most present on the title track, Poof, which stands as a great example of the evolution of Zooid’s sound. The band uses space on this song in a way that recalls the intentional use of silence revolutionized by the AACM. Contrast in timbre, tone, and intensity give the piece a density that reveals itself on repeated listens.

One doesn’t need to be intimately familiar with Zooid’s past work to understand this music, but it is an incredible joy and a service to Threadgill’s life and work to appreciate where it is now as viewed from where it’s been. Poof is a genuinely incredible record on its own terms but also stands as another reminder of Threadgill’s endless font of creativity, another revolution in the language.

Great review of a great album, thank you!