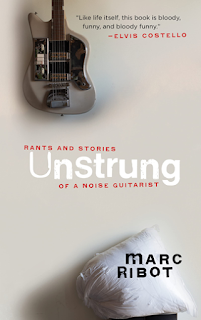 Three of us had a conversation about Marc Ribot’s new book. We started with the question, “Why’d you pick up the book?”

Gary : I got excited about the book — and pre-ordered it — not just because Marc Ribot is one of my favorite guitarists but because I know he’s a very smart guy, very funny, and has a way with words. I interviewed Marc once, around 1990, and that is still one of the most fun conversations I remember from my aborted “jazz journalist” career. I was not bothered that this isn’t “just” a music book. The music pieces are great (and I’ll go into detail later, depending on what you all say), but the non-music essays, the short stories, the vignettes and screenplay treatments, sort of “rhymed” with what I love about Marc’s music: wit, intelligence, passion, and resistance.

Matt : Full disclosure — I can be a literary snob (and music snob, too) and enjoyed this book for its structure, technique and content. Ribot is a fascinating, talented artist, and that’s what drew me to this work initially.

Anthony : I actually didn’t know about Unstrung until Gary proposed a collaborative review of it. I had previously read just a little in the way of Ribot’s articles and interviews over my years of following his music, and became intrigued at the notion of reading and writing about his book. I was not prepared for his writing to be so hilarious, wildly creative, and deeply affective. Many times, even as I felt a pull to enter the flow of reading fine writing, I also wanted to slow down and linger over particular passages and turns-of-phrase, to savor them.

Gary : Yes, the man has a way with words. A few pieces really stuck out to me, but the Henry Grimes appreciation, for me, was completely eye opening. I knew about Grimes as a bassist, but the idea that he also was responsible for this collection of poetry, really struck me. I haven’t bought the book of poems ($100 on Amazon), but I did get his biography ($9.99 on Kindle). What was interesting to me was how the connection between the musician and the words in Grimes is mirrored by the connection between the musician and the words in Ribot. These early chapters are easier to grok because they are about music — the connection is explicit — but the later stuff? The words and the guitar playing come from the same head. What’s the connection?

Matt : After letting the book digest for a few days I think of all the sections blurring together. The connection for the “author,” let's call Ribot, is connection. Everything bleeds, runs, merges and morphs together in perception and memory.

Anthony : Like Matt, I get the feeling that all the pieces in the book, though wildly diverse, somehow blend and cohere. For me, the connection is more “felt” than “understood.” Part I offers pieces I appreciate for their perspectives on musicians and moments in music history, the art of making music and the life of the artist. Part II seems to turn a corner to matters more personal to the author, but also less conceptual, somehow -- more experiential. From trying to grok a rooster’s “strange scream...of abandoned rage,” to the touching piece written to his daughter about disassembling the bed in which she spent “the chrysalis of adolescence.” Then in Parts III & IV, there’s fewer obvious places to hang my hat of rational understanding, and I’m left to notice my emotional reactions to pieces — shock, surprise, laughter, confusion. For instance, the screenplay piece about a train ride from New Jersey to NYC that, due to a tragic lack of sandwiches, results in cannibalism — to be shot “real-time one-take,” ha!

Gary : Here’s the thing: for so much of the music we read and write about on FJB, my mind almost always comes up with a story, either specific images or “the feeling” of a story, narrative movement. Sometimes I actually ask myself, if this music were a soundtrack, what would be happening on the screen? In Unstrung, Marc gives us stories directly, and I find myself making the connection in the other direction. I know that thinking of one medium in terms of another medium is a mugs game, but knowing that Marc Ribot, whose music has meant so much to me all my adult life, wrote a story like “For Mauritzio” means something to me. It’s three scant pages of blistering fable about an abused kid that I actually made copies of and gave to my two daughters, one of whom cares for foster kids and the other is a child protective services caseworker. I’m not saying it’s a better story because of the music — the story stands on its own — but that dimension adds to my experience of the book. Part IV (I call it “the fables section”) is great and I’ve re-read just that section a few times.

Matt : Gary you just articulated how art, and in this case, “For Mauritzio,” works for me. I really enjoy the shorter fiction pieces, especially “It Was Almost Like Paris” and “Putting Your Arms Around a Memory.” To make a broad generalization, “Punks” and “Outsiders” are true Romantics in the literary and aesthetic sense. Real emotions and thoughts are at the core of what they create. Ribot is a perfect, fascinating example of that for me. This book was an epiphany in that respect. It has inspired me to dig into his solo stuff, search for Frantz Casseus and feel connected.

Anthony : Right there with you guys. I’m actually a social worker by profession, and I had notes on “For Mauritzio'' as well. So many children face abuse, or neglect, or the wounds of other adversities -- and the ways they find to survive embody both tragedy and triumph. And more broadly speaking, of the ways that we all get through soul-crushing experiences, music is surely among the most universal. To this point, “Lies and Distortion,” the book’s first piece (and some gut-punchingly good writing), offers insight into the ways music is used to cope, to heal, to forget: “... the truth about playing really loud is this: on a really good night, nothing hurts — not howling volume, not airless rooms at sauna temperatures, not bleeding calluses, not a fever of 103, not a bottle in the head, not a recent divorce. Nothing much. Not till later.” Getting back to what Gary said about relating to music via narrative — wise folks have taught me that our minds rarely cease constructing stories about our experience. Whether it’s about a song we hear, the person in front of us at the checkout line, or the image staring back at us in the mirror — for me, it comes down to whether a particular story is liberating or imprisoning. In Unstrung, we get them all.