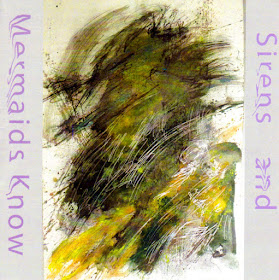 I must state from the beginning, that this is the best piano trio that I’ve listened so far in 2021. The fun fact is that Mermaids and Sirens Know comes out ten whole years after the four tracks were recorded. All three players have really made their names heard in the grey, but so appealing to some of us, zone between free jazz, free improvisation, rock and, even, noise. Walter, who is a disciple, of all out punk attack in drumming, has managed to participate in so many great free jazz albums. Call him a jazz drummer too… In bands like the Flying Lutenbachers, but also in various more jazzy formations he has proven his skills. Yes, I’m a fan…Pianist Eric Zinman, apart from being a member of the amazing Linda Sharrock Network, has also shared the same stage and studio with saxophonist Mario Rechtern, again in various formations that cover any ground from improvisation to jazz, to any kind of experimentation.

Mermaids and Sirens is comprised of four tracks with a total duration of more than an hour. All four of them present the three musicians in great form, eager and aggressive to explore. Zinman’s Tayloresque playing allows room for the other two to attack their instruments (which are alto, baritone and sopranino saxes for Rechtern), while he bangs on the keyboard with the force and wit of the great Cecil Taylor.

I’ve already wrote about him, but it makes no justice to him, to label Walter’s playing as just “energetic” or “dynamic”. Apart from being the backbone in all tracks, his interaction with his fellow comrades makes him a point of reference for the cd. Rechtern’s sax playing, as always, make him the ideal partner. Even though he tends to get carried away (but is this a bad thing when we are talking about a free jazz recording?), he never slips out of phenomenon, meaning the collective feeling of the trio. I also believe that he has listened to a lot of Frank Lowe’s playing…

Their aggressive playing leaves enough room for small details that prove fruitful for the listener: Zinman’s piano timbre, Walter’s percussion work on the less noisy parts, the shifts between the saxes from Rechtern.

Overall a great recording, that, so far, has made it to my shortlist for the best of 2021. You can listen and buy here: