Thursday night at Boulez Hall
We raced it from the Hauptbahnhof to Boulez Hall in the rain. My train had been delayed and we had about 10 minutes to make the 10 minute bike ride, show our proof of vaccination, scan the tickets, peel off our wet rain clothing, and find our seats. We were a bit frazzled by the time we located our places in the upper balcony of the lush ovular hall. Through a light clatter from the drums, a rustle of musical scores, and a few dolphin calls emanating from the bass, we began to settle in. Then, the first notes from Swedish pianist Bobo Stenson flowed from his keyboard and our nerves were quickly subdued.

The first night of the Jazzfest Berlin was off to a start. The main part of the festival was at the Silent Green culture center about 8 kilometers from the classical music hall that this concert was taking place in. The festival, which has been shifting and growing, extending and morphing over the past several years, was back in person (an online), after being forced to be entirely online last year, and spread out even further than before. The constraints of the pandemic last year fostered a connection with Roulette in New York City, where a live stream connected the cities. This year, the idea grew with live streams from concerts in South Africa (curated by Jess White in Johannesburg), and multimedia contributions from Brazil (Juliano Gentile and Manoela Wright for São Paulo) and Egypt (Maurice Louca in Cairo). In Berlin, aside from the Silent Green, and tonight, Boulez Hall, the festival also would be featuring the famous Kaiser Wilhelm Memorial Church in Charlottenburg, the nerve center of former West Berlin. More about these locations later, now back to Stenson's trio.


The music was ebullient, but at the same time, reserved. This seems to be the pianists trademark. Effortlessly, his melodies intertwined with Anders Jormin's bass bowing, and the bright - and sometimes humorous - responses from Jon Fält's percussive accompaniment. The trio, aside from some selected favorites, was presenting a set of new music that will be recorded for an upcoming ECM release next year. From gentle, slightly dissonant intros to pulsating, vibrant crescendos, the trio's work was refined and radiant.

The duo of trumpeter Susanna Santos Silva and pianist Kaja Draksler followed. The two have been performing together for a decent portion of their lives and alhough from opposite ends of Europe, they share an obvious musical affinity. At the Boulez Hall Steinway grand piano, Draksler began with a series tightly coupled, short phrases, while Silva seemed to emit what I can best identify as microtones. Both seemed equally as apart in their playing as connected on the outer edges, which was quite a contrast to the previous set. As their interplay continued, the duo engaged in ever more complex parallel play, hitting dissonant intervals and unexpected harmonies. The pathos grew as Silva's long legato tones changed to explosive bursts, and Draksler's began traveling energetically up and down the keyboard. The improvisation turned inward towards its end, for example, plucked notes from inside and outside the prepared piano and the 'pop' of the mouthpiece extruded from the trumpet made up an extensive passage.

The final set was from pianist Vijay Iyer's trio that recently released Uneasy - namely the pianist with drummer Tyshawn Sorey and bassist Linda May Han Oh. It also happened to be the first date of their European Tour and Iyer's excitement was palpable. "The pandemic," he said, "has given us chance to realize what's important and playing for all of you is it." Setting an example, he continued "we may play masked, but our hearts are open."
What happened next was extraordinary. The album, without a doubt, captures the 'unease' that has been growing under society (for Iyer in the US, but it's not geographically limited) over recent years, but in concert, the energy that the trio generated on the tunes was staggering. Iyer's playing was lyrical and rollicking, Oh's bass playing was kinetic and as much a part of the melody as the support, and Sorey's work was that of the conductor of this mini-orchestra. Songs like 'Combat Breathing' and the war horse 'Night and Day' are powerful on the recording, and live, nearly combusting. Any wisp of musical exhaustion after the first two hour of music was whisked away immediately by the gale winds from the trio.

It was still raining when the concert ended, but it hardly mattered, we were gliding through the night.

As noted, the festival is expansive. Covering multiple nights and multiple venues, it's hard to take it all in, and, to be honest, it can be bit of a sensory overload. I was still holding onto bits of Thursday's show when I arrived at the entrance to the former crematorium turned cultural space in the Wedding district on Saturday. The 19th century buildings are stately, the grounds surrounded by the period architecture that makes up the most stately parts of Berlin, and deep underground, in the 'Betonhalle', the performance space is a high-tech set up. Large video displays on each of the walls live-casted concerts and video installations, all showing different angles. (During one set I was wondering why someone seemed to starting directly and unflinchingly at me, until I realized he was concentrating on the screen to my left, while I was intent on the one to the front).

The opening show was a live-cast from Johannesburg. Bassist and composer Shane Cooper and the Dinaledi Chamber Ensemble performed a suite of new music. The music was pleasant as it explored and layered folk-like melodies with light electronics and poly-rhythmic ideas.
Then, reverberant breathing through the trumpet and the gentle roil of the drums opened the next set from trumpeter Nate Wooley and his Columbia Icefield project. The mournful, charged, amplified breath blew a cold breeze across the stage. It was musical dawn, and guitarist Ava Mendoza provided the first rays of light breaking through the tonal darkness. Deep, thick droning tones hovered in the background, emanating from Susan Alcorn's pedal steel guitar. As the music awoke, the textures came into sharp relief: Wooley changing from a metallic rush of sound to a mournful melody, drummer Ryan Sawyer adding additional texture, and Mendoza delivering aggressive arpeggios and discordant tones.
The music refers to Wooley's heimat in the Pacific Northwest of the US, where the Columbia River's waters collide with the tumultuous Pacific ocean. The tentatively titled tunes certainly projected this atmosphere. From the icy winds to the soaring grandeur. Plus, the ghosts of western music are strongly bound with Alcorn's instrument. While her playing far transcends 'country', she brings something intangibly 'western' to the setting. The music is impressionistic and often slow moving, but also at times explosive, it works its way between memory and feeling, and leaves a long lingering impressions.

My goal was to trace the physical breadth of the concert as much as possible with the time I had (I covered about 1/3 of the concerts, and 3/4 of the locations), so I left the Betonhalle for the Kuppelhalle, after catching the first twenty minutes of the riveting drummer/vocalist Maria Portugal's set of explosive free-jazz and Brazilian flavored music. At the Kuppelhalle, the smaller, cathedral-like former mourning hall, Turkish vocalist Cansu Tanrıkulu performed with a trio plus one. The trio, saxophonist Tobias Delius, bassist Greg Cohen, and the plus one, guitarist Marc Ribot. How could I not be there? I would have surely died from FOMO had I not been.

Beneath projected video art featuring images of the vocalist, emergency blankets, and CRT monitors, the trio + 1 wasted no time getting started. Tanrıkulu's otherworldly vocals sailed effortlessly through the octaves and around Delius' powerful lines. Throughout, Cohen was aflutter and at first, Ribot - was he even plugged in? - scratched at his strings, but then over Cohen's unwavering rhythm, the guitarist starting building up a jazz inflected solo that went from an acoustic whisper to splitting its pants. The music, a freely improvised cocreation of the moment, was impulse and reaction. It breathed naturally, unforced, and as precise as it was unexpected.

Back at the Betonhalle, the evening wrapped up with the live music of Ahmed, an ensemble, named after oudist and bassist Ahmed Abdul-Malik, comprised of British pianist Pat Thomas, French drummer Antonin Gerbal, Berlin-based Swedish bassist Joel Grip, and British saxophonist Seymour Wright. The group, which bases its music off motives composed by Abdul-Malik for his Middle-Eastern/Jazz fusions, spent the better part of an hour locked in a hypnotic and demanding groove. The music had the feel of something from another time, Middle Eastern jazz noir, so to speak. Grip and Gerbal were a relentless and powerful engine driving the music, while Wright blew ceaselessly, twirling the themes around and around, making small incremental changes and adding tension at every turn. Thomas sometimes struck the extremities of the keyboards with his palms flat out, as percussive of an action as one can do while still making music with the instrument. This approach was interspersed with close dissonant tonal clusters that effectively wound the music ever tighter. Often in improvised music the flow is to start exploratory and searching until locking into something, these guys had it all backwards, and it worked! They only backed off at the very end when Grip seized the moment to quickly distill everything just played in a highly effective solo bass outro. 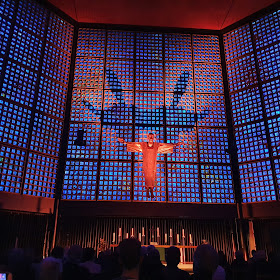 Anticipating feeling pretty musically saturated, I had opted for a single concert on the last day at the other location for the festival, the memorial church on Kurfürstendamm in Charlottenburg. The memorial church is an octagonal building comprised of a staggering 21,292 stained glass inlays. The original church spire, heavily damaged in World War II, remains as a reminder of the atrocities. Around the church grounds, there are barricades everywhere - a reminder of the ever under construction city and unfortunately of the 2016 Christmas Market attack.
After weaving around the bollards and traffic fences, we entered the church and picked a seat facing the large Jesus sculpture and settled in for the solo organ piece from Norwegian keyboardist Ståle Storløkken, the man at the heart of Elephant9 and Supersilent, as well as a key member of Terje Rypdal's groups from the past decade or so. I had no idea what to expect, but what came next was something that I actually had a hard time taking notes on as it unfolded.
The work was new, entitled Ghost Caravan, and just released on Hubro. The music was textural, and while there were motives, they were more like sonic happenings. Storløkken was able to draw out sounds that you typically do not expect from a church organ, and also used the familiar sounds to great effect. The music was alternatively minimalistic and bombastic, there were times when the whole church shook from nearly soundless vibrations, and other times when the pipes peeped in perfect harmony.
Possibly the strangest part was that there was nothing to see. This was a listening event, as the organ itself was above the heads of the audience, invisible. So, the mind wanders and at some point I wondered: could the music itself work outside of the church itself? Could you sit at home and have this experience, one where, left with just the music, and under the outstretched arms of Jesus, indistinct memories and thoughts mix and travel through you in their own ghostly vehicles? My thoughts were interrupted, however, when Storløkken pulled out all of the stops and in an existentially threatening moment, seemed to play all of the notes at once, jolting all back to the now.

I left a bit puzzled, and wonderfully so.

Watch it all here, available for a year: https://www.arte.tv/de/videos/RC-020309/jazzfest-berlin/