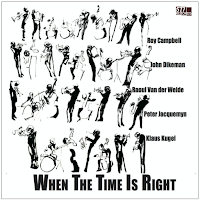 The music on this album is raw, intense, energetic, agitated, somewhat uncontrolled and at moments chaotic, and with less than ideal recording quality, but we like it.

We like it because of the presence of the late Roy Campbell Jr. on trumpet, flugelhorn and flute, and even if not everything he's ever recorded is memorable, it is great to have new releases on which he performs.

He is in the company of John Dikeman on sax, Raoul van der Weide on cello and percussion, Peter Jacquemyn on bass and voice, and Klaus Kugel on drums. The five musicians met at the Doek Festival at the Bimhuis in Amsterdam and they improvised this piece on stage. I do not think this American/Dutch/Belgian/German ensemble ever performed together before, yet they interact quite strongly. The only track lasts around 37 minutes. It is too short and we wish there was more, yet we're happy to hear it.

There are moments when Campbell is up there in the sky, while Dikeman's sax is down on the ground with deep earthly sounds. Van der Weide's cello and Jacquemyn's bowed bass - and throat singing -occasionaly engage in fierce dialogues. Variation is guaranteed.

The music is also relentless, with many things happening at the same time, and Kugel is driving things forward with power and rhythmic dynamics. There is a long quiet part with bowed strings and with Campbell on flute when the atmosphere becomes more gentle.

But this is one of the rare moments to breathe, and when they arise they are usually short-lived because one of the other musician feels the need to pick up the pace and infuse the band again with the energy that characterises its 'raison d'être'.

I'm happy this music exists. I wish the quality could have been better.