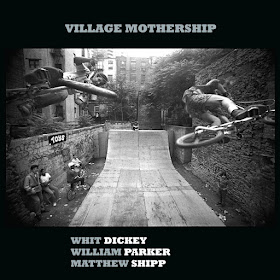 All three are, of course, well known for producing prodigious amounts of high-quality music. Village Mothership complements such releases as Dickey’s pair as a leader a couple years back ( reviewed for the FJC by Lee Rice Epstein ) as well as Parker’s Painters Winter with Daniel Carter and Hamid Drake ( reviewed for the FJC by Kenneth Blanchard ) and Shipp’s latest solo outing Codebreaker, both also released this fall. Like Dickey’s and Parker’s records but unlike Shipp’s, most of these tunes are relatively lengthy, with three of the six topping ten minutes, so there is plenty of room for melodies and rhythms to develop and evolve.

The concept behind the title as explained in the liner notes is a bit vague (an “homage to the rich environment that fed the development of these artists”), as is the relationship of the cover photo and song titles to the music, which, appropriately, is left to speak for itself. Opener “A Thing & Nothing” and closer “Nothing & a Thing” bracket the proceedings and well represent them, the former a release of pent-up energy as the three enter almost simultaneously and the latter developing slowly from Shipp’s initial exploration of vaguely Monk-like harmonies. Both tracks then ebb and flow, often with one member of the trio hanging back while the others explore an idea.

The relatively up-tempo “Whirling in the Void” and “Down Void Way” seem similarly positioned to complement one another, being more dissonant and unpredictable than the surrounding tracks. Parker’s ability to provide simultaneous harmonic and melodic support (including some of his signature bowing on the latter track) is fully on display, his deep tones maintaining the forward momentum. Here, the jazz is especially free. “Nothingness,” by contrast, though its title shares the theme of emptiness, is almost a ballad though punctuated by occasional bursts of activity.

The centerpiece title track starts with a somewhat halting solo from Dickey, who locks in once Parker and Shipp enter. The interplay between cascading piano notes and cymbals perhaps suggests the mothership taking flight. Nearing the midway point, Shipp drops out and lets Parker ride the wave of cymbals for a while before establishing a walking pattern for Shipp’s reentry. The pattern repeats as the mothership, now in full flight, takes listeners through space where, to quote Dickey from the liner notes, “mystical stuff is happening” until the rhythm section brings the craft in for a gentle landing.

Unsurprisingly, then, Dickey, Parker, and Shipp have crafted another great record that will appeal to a wide range of contemporary jazz fans. Hopefully, the trio will not wait quite as long to reconvene again.

Also one of my favorites lately! Nice review.