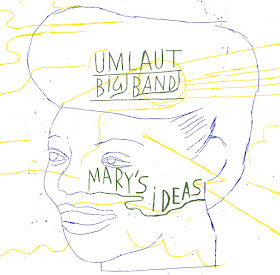 For 10 years, the rotating lineup of the Umlaut Big Band has been a vehicle for saxophonist Pierre-Antoine Badaroux’s research into underappreciated or forgotten composers and arrangers. The group’s focus has been the great big band and dance bands from the early to mid 1900s, with albums giving due to Don Redman, Benny Carter, Will Hudson, John Nesbitt, Gene Gifford, and Mary Lou Williams. The newest album, Mary’s Ideas: Umlaut Big Band Plays Mary Lou Williams is a deep dive into her compositions and arrangements, an album that’s twice as long as any of their previous ones, and at least twice as ambitious.

Williams is probably best remembered for her piano playing, with some attention given to her copious arrangements. For the most part, she represents a kind of idealized version of women in jazz, a woman who could do it all, who was beautiful and talented and broke through all the barriers. It’s a partial truth. To get past the surface narrative, Badaroux went deep into Williams’s archives, spending time with arrangements, drafts, and manuscripts. He writes in the lengthy, detailed liner notes:

In 1999, the Institute of Jazz Studies acquired 170 boxes of her personal effects. The hundreds of music manuscripts, sometimes fragmentary, incomplete or untitled, constitute an outstanding collection of documents to understand the underlying process of her compositions. There are very few complete compositions, ready to be played, but if one considers each manuscript as part of a whole set of documents, if it is put in perspective with biographical and discographical information, it becomes possible to reconstitute, and therefore hear, entire parts of Mary Lou Williams’s forgotten oeuvre. This is the idea that made me, with Benjamin Dousteyssier, visit this collection in 2019. We brought back home many pictures, a gigantic puzzle to reconstruct. We had to decipher, understand, date, assemble, imagine and finally play this music.

What emerged on the other side is a fascinating and vital document, less a final picture of Williams’s design than a gorgeously rendered painting of Badaroux and Dousteyssier’s loving regard for her art. There’s hardly any remove, the two are fully immersed in Williams’s vision and style.

At the foundation of the band is a rock-solid rhythm section: Romain Vuillemin on guitar and banjo, pianist Matthieu Naulleau, bassist Sébastien Beliah, and drummer Antonin Gerbal. The brass section features four trumpets—Brice Pichard, Pauline Leblond, Gabriel Levasseur, and Emil Strandberg—alongside Michaël Ballue, Alexis Persigan, and Robinson Khoury on trombone, and Judith Wekstein on bass trombone. In addition to directing, Baradoux leads on alto alongside Antonin-Tri Hoang, Pierre Borel and Geoffroy Gesser double on tenor and clarinet, and Dousteyssier rounds out the winds playing baritone, alto, and bass saxophones. At its heart, Umlaut Big Band presents as a classic dance band, with a big sound and dazzling solos. There are no overtly radical twists or inversions—unlike dozens of other projects from the same players—but the two-and-a-half-hour set is infused with a strong sense of modernity and avant-garde innovation. Much of this is used to amplify Williams’s concepts, the band plays everything from long sections of the “Zodiac Suite” (“Taurus,” “Aquarius,” and “Virgo” are presented for the first time ever as Williams intended, and performed by a 24-piece chamber orchestra) to scraps, drafts, and even revisions. Variations of “Stardust” include both trio and big band setting, and “Lonely Moments” appears in two arrangements, one from 1943 and a second from 1946. Thirty minutes in, “Body and Soul” slides into the set with a stunning lushness. A few songs later, “Sleepy Valley,” arranged for the Duke Ellington Orchestra in 1943, features Leblond and Borel, whose solos showcase Umlaut’s dazzling intersection of then and now. This is one of the reasons Umlaut Big Band specifically is just right for Williams’s music. As Badaroux writes, “her music is demanding and ambitious, but, often due to lack of time and resources, it is repeatedly conventionalized, simplified, amputated.” Additionally, the program wisely does not present her music chronologically. Instead, transporting the listener from 1968 to 1943 or 1955 to 1974 reveals how Williams was always striving, always pushing herself forward.

All this may seem counterintuitive for a contemporary band that performs in black suits and ties, seated at matching big band stands. Admittedly, on paper this seems like the kind of thing that would approach kitsch or invite subversion, and it’s to the entire group’s credit that sincerity wins out. There are no winks at the audience, no smirks or knowing looks offstage. Instead, Umlaut Big Band is a monster of a dance band, playing with a joy and spirit that grounds the music, rather than hoisting it aloft as something sacred and fragile. As a counterweight to the common, simple narrative of Williams as an idealized version of a woman in jazz, Mary’s Ideas enlivens her body of work, granting it a newly modern, spry life.