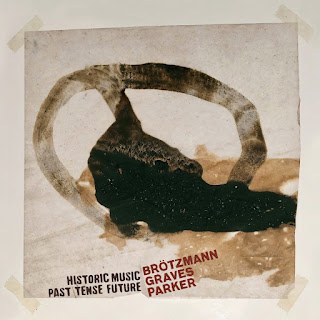 This is one of those recordings that might be welcomed with simply respectful silence and celebration, or you might want to shout along at times. A 68-minute performance spread across two LPs, it’s a kind of simultaneous Jeremiad and Hymn of Praise, for all the life missed, all the life lived and all the life possible, a vast collective utterance that has passed beyond all notions of comprehensible speech into absolute screaming and pounding, spell, convulsion, prayer and dance, at the seeming limits of human expression.

There are rare musicians who possess an abundance of energy, vision or intensity, and then there are the few who can somehow balance all three to a significant degree. The trio of Peter Brötzmann, Milford Graves and William Parker is made up entirely of such musicians, and it seems like one of those assemblies that should have toured regularly from the 1970s on. Such, sadly, was not the case. Their appearances together were few, and this performance, from the front room of CBGBs on March 29, 2002, is the first recording to emerge.

While Brötzmann and Parker are among the most recorded musicians in free jazz, Milford Graves rarely recorded or performed in public. One can find numerous performances of the first rank by Brötzmann and Parker together, and it would be hard to better the two-CD Never Too Late But Always Too Early, recorded just a year earlier on April 10, 2001 at Montreal’s Casa Del Popolo with their regular partner Hamid Drake on drums. Released on Eremite in 2003 with a dedication to the then recently deceased Peter Kowald, Never Too Late was named the record of the year by both Wire and Cadence. No one should have to choose between them, both wonderfully recorded by Michael Ehlers and the Eremite Mobile Unit, but what the Montreal recording may gain from familiarity, this one makes up for in surprise.

Milford Graves first emerged with the early ESP-Disk recordings of the Giuseppi Logan Quartet and the New York Art Quartet, having already transformed an early mastery of Latin drumming (his youthful Milford Graves Latino Quintet included Chick Corea) and his devotion to free jazz into a uniquely orchestral percussive language. Recorded nearly forty years later, Historic Music Past Tense Future will stand as testament to one of the greatest drummers in a century of the rich African-American tradition. There is simply so much going on: polyrhythms sometimes even with polyphonic melodies, drumming that is both propulsive, moving forward, and yet fixed on the instant, framing and shaping multiple moving parts, the two bass drums of his kit a temple orchestra in their own right. He even does astonishing things with register changes, sometimes shifting the pitch of his whole approach. Together he and Parker make up one of the greatest rhythm teams in the history of free music, with Parker playing rhythms and patterns so far inside Graves’ work that it sounds like it’s coming from one person with the eight arms of Shiva. The broken-field accompaniment to Brötzmann’s alto saxophone (at various times he plays tenor and alto saxophones, tarogato and likely his clarinet in A) on Side Three is just one more surprise, as is a moment in the saxophonist’s second passage on Side One, when (really) he briefly quotes “Exactly Like You”.

The fourth and final side is a further transformation, brought about by Graves’ vocal contribution. After his spoken introduction, he begins the most extraordinary chanting, his voice alternately contorted and sweet, initially accompanied by the gentle strings of Parker on doussin gouni, a lute or harp-like African instrument favoured by Don Cherry. Brötzmann enters with a sustained reedy drone in the lowest register of what I take to be his clarinet in A.

Graves turns to his drums, Parker to his bass, Brötzmann becomes animated, episodes of excited chanting pushing things further out, intensifying a passage of drums and bass until Brötzmann returns on tenor for a final climactic passage that first peaks with a high squeal before turning then to the almost feathery, Ayler-like voice that he can sometimes channel, Graves turning to a warbling chant, the three then raising the roof with a final expressionist flurry.

Even heard on record, the performance is exhausting - as well as wonderful. 2022’s Top Ten list starts early.

I must admit that, being a Brotz fan (and a Parker fan as well) for a long time, i lately suffer from a Brotz burnout -so prolific he is.
But this one is a must and M. Graves, a master percussionist and great human being he was, makes this 2LP unmissable.
All the other reasons are there in this great piece by Stuart//

Yup, I'm getting this on Friday (Bandcamp Friday) and can't wait to hear it. The sound quality from the sample seems really high. But what really blows my is that this was recorded at CBGBs, birthplace of The Ramones.

Great piece, Stuart, and timely for me. I was just stumbled on David Murray/Milford Graves duet "Real Deal" and was sort of stunned by how good it was. Definitely checking this out.

Thanks, Gary,
Milford Graves was brilliant--there's wonderful stuff from the '60s with Albert Ayler(Love Cry) as well as solo,Logan and NY Art Quartet material (especially Mohawk, which is particularly well recorded).