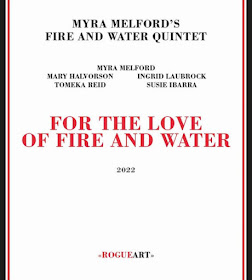 It’s pretty much a dream team on For the Love of Fire and Water: pianist Myra Melford along with with guitarist Mary Halvorson, saxophonist Ingrid Laubrock, cellist Tomeka Reid, and percussionist Susie Ibarra. All have played with Melford at one time or another, but never all together, until one fateful night a few years back at The Stone in New York City during a week that Melford was curating.

Note however that there are no stars in this all-star group, rather each listens, contributes, supports and combines their energies to lift the music. What they create together is by turns an engaging and exciting masterstroke of composition and improvisation.

Perhaps a bit of credit should also go to American artist Cy Twombly, whose series of drawings “Gaete St (For the Live of Fire and Water)” is an inspiration for Melford. A look at the images, which were made by Twombly when he was in the Italian coastal village of Gaeta, suggest a light touch but bold statements. There is an energy to the simple lines that suggest the elements and in the music that Melford composed, these properties are omnipresent. The opening track, simply entitled “I” (it goes up to "X”), begins with an atonal melody from Melford’s piano. Or if ‘atonal’ is the wrong word, it is a quirky melody that jumps large intervals delivered at a quick tempo. She is joined by Reid a couple minutes in, which delivers a reactive counter-melody. As Ibarra’s alliterative percussion enters, the piano and cello have locked into a taught dance. About two-thirds through, Laubrock plays a series of fast, lithe runs, leading finally to Halvorson’s decorative, pitch-bending contribution. ‘II’ begins on the bold side, with a strident rhythmic pulse from Melford and a well defined melody from Laubrock and Reid in unison. The counter-melodic lines that we heard a bit of at the end of the last track become much more prominent. Then, we hear the songs main refrain, a very strong theme that, every time I hear it, is reminiscent of Julius Hemphill’s sax lines in his fantastic song 'Dogon A.D.’. This allusion comes up again (to my ears) in track ‘VIII’, which is constructed around group hand-clapping and a slithery syncopated line from the cello. In between these tracks are a multitude of ideas and excellent playing. Laubrock is front and centre on much of ‘V’ and here playing is every bit as fiery as it is fluid. ‘VI’ begins with plucking from Halvorson and stays in exploratory mode as she and Ibarra converse. ‘VII’ features Melford challenging percussive Taylor-esque runs, matched by the actual percussion and guitar. The group then coalesces into a fierce, forward moving stomp, spawning a squiggling solo from Halvorson.

The music invites the listener in. Though there are moments of abrasiveness, the interlocking of rhythmic ideas, unusual melodic forays, keep it enthralling. The layering of the instruments and melodic ideas beg for repeated listening. The last track ‘X’, provides closure to the music. Melford’s piano delivers a gentle, calming chord progression, Laubrock and Reid offers a subtle tracing of the musical contours and Halvorson plays in parallel, a series of textual colors. Maybe it’s a musical sunset, a calm fiery sphere reddens as it slowly sets over a shimmering ocean.