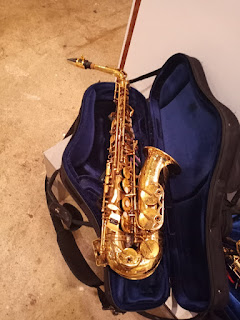 Thanks to Ross, Wim, Dave, Paal and Fred

Live music is a gateway drug.

Between sets an audience member joked, “They were great, but they only played one song…” to which Paal Nilssen-Love reposted, “Yeah, but there were a lot of little songs in between…”

To me this was the esprit de corps of the band, its identity, sound, and modus operandi. This band has two gears, this one and the next, and they shift between them seamlessly, deftly, sometimes ascending sometimes descending but always moving, progressing, naturally as an organism is born and thrives and then, as all things must, passes. 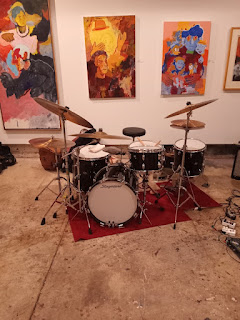 I was there with a friend, a very open-minded soul, and a quick study, yet still I was worried that it would be too much. It has taken me years to let the music come to me and I was worried this was just going to be atonal skronk to her virgin ears. Thankfully, Ballister’s performance was engaging and inspiring.

Each set was approximately a half-hour with Dave Rempis switching between alto, tenor and baritone, Paal Nilssen-Love rummaging for and then exploding drumbeats, smacks, and dulcet rings, and Fred Lonberg-Holm cradling his cello, eyes closed as if searching the vast expanse of musical expression for next note, be it plucked or bowed, then playing it. The music rose and fell, it idled then soared, it rumbled and faded. But it always was music, a living breathing music created, played, and attenuated through the physical presence and movements of the trio. 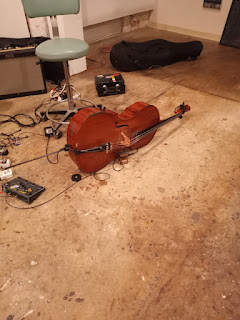 I recommend watching the linked videos to enjoy the trio’s exuberance and authority, guile, and joy. A special highlight for me is the second half of the second set. Words like “coalesce” or phrases like “seed bearing fruit” come to mind. There’s the end when Dave is looking to re-enter on alto, he starts to lean in, and the horn almost touches his lips, but he pulls back as Fred is locked in and Dave shakes his head in affirmation, encouragement, and enjoyment. And then, it's gone.

“It's like watching a dance,” said my friend, and I thought “Yes, what one sees as much as hears…” then realized hearing the band warm up earlier with Fred Lonberg-Holm riffing on Chuck Mangione’s “Feels So Good” told me it was going to be all right. And it was, and more. I was left somewhere in the firmament above South Carolina’s capital city and my friend was converted to improvised music, “It makes me want to learn more about this music,” she said. Win / Win.