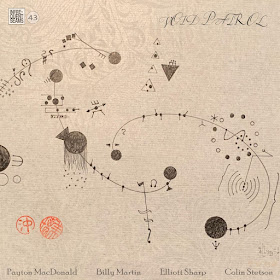 By Paul Acquaro
Many years ago I discovered a recording that rewired parts of my musical listening brain, the dark and lugubriously melodic Octave Of The Holy Innocents (Day Eight Music, 1993) from bassist Jonas Hellborg along with guitarist Buckethead and drummer Michael Shrieve. After many listens, my infatuation cooled but the album had buried itself deep in my brain. When I heard percussionist and marimba player (and credited here with keyboard percussion) Payton MacDonald's latest creation Void Patrol with guitarist Elliot Sharp, saxophonist Colin Stetson and percussionist Billy Martin, those old long buried musical memories re-surfaced, reminding me about just how good this dark, layered,  and rhythmically intense music felt.

Void Patrol was born under pandemic circumstances, like much of what is being released at the moment. MacDonald, also a composer and teacher in the music department at William Patterson University in New Jersey, took advantage of some grant funding and extra available time from time not gigging, and constructed this powerful group. Their work was done remotely, constructed from a series of tracks that MacDonald recorded and then shared. As he explained, “through emails, Zooms, and many phone calls we agreed on a basic set of parameters for pitch, form, and groove, and then just got to work making music.”

From the moment the music begins to trickle through the Bluetooth speakers - or ear buds, bookshelf Bose, or maybe even IKEA lamp (I just know I am going to break down and get one one of those someday) - the results of their parameter tweaking is riveting. 'Antares' kicks off with an atmospheric electric slide guitar figure from Sharp that interpolates Morricone-accented lines with an insistent percussive/melodic pattern from MacDonald's marimba. The sound of the instrument is unique, its woodsy timbre lends a certain lightness to the track that grows denser with Martin's groove oriented drumming and added layers of electronics. Towards the end, Stetson's sax add to the unhurried drama. His circular patterns pull the listener in one direction while the electronic oscillations pull in another. Take a few deep breaths after listening to that one because the next, 'Rigel' pick ups with the same intensity.

The settings are tweaked from track to track, resulting in a variety of appraoachs. The second track, 'Sirius,' has much more space, beginning with what sounds like a backwards saxophone underlaid with light percussion. Soon, Sharp tosses fractalized chord tones across the playfield and the keyboard percussion also adds quite a splash towards the end. 'Hadar' employs the resonant tonality of hand drums along with fragmented melodic statements from the marimba. Ghostly moans add a touch of darkness to the vibrating intensity of the track. The closing track, 'Acrux,' opens with an atmospheric melody from MacDonald and gently expanding melody from Stetson. Martin's scattered percussion and Sharp's electronic textures simulate dry-ice smoke and spooky spotlights, situating the bubbling layers of sound perfectly.

Void Patrol album is captivating and effective. I am reasonably sure that it will be settling down next to Octaves in the comings weeks, sharing the creative space where shadowy tones mix with strong rhythmic figures and wispy moments of hope.

In October 2020, MacDonald started an ambitious recording project, recording on marimba one full-length recording a week for over a year. As of this writing, it looks like he is on number 61. The recordings all have unique foci and are combination of solo works as well as collaborations. Just a quick sample of a couple reveals the depth and expertise that MacDonald brings to the instrument...

Explorations 21: The Music of Elliot Sharp 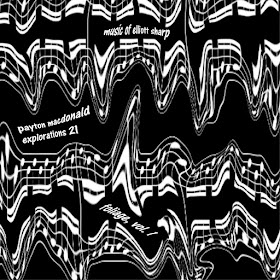 Explorations 21 finds MacDonald performing a score from Elliot Sharp, a polymath whose own work goes far beyond his guitar, and in this case, to his classical and new music compositional pieces. The composition, 'Foliage,' is actually a 116 page graphically notated score, and MacDonald approaches it solo via marimba and additional electronics. The tracks unfold in different ways, for example, the first is thick with distortion and ephemeral melodic statements and the second is rhythmically dense, with a push and pull of polyrhythms and tempos that are both soothing and a bit disturbing. Each one has something new to discover, like the spaciousness on the third track or the insistant percussive rain in the next one.


Explorations 16: the Music of Anthony Braxton 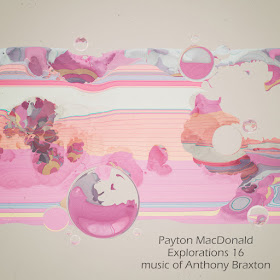 Explorations 16 is MacDonald's interpretation of Anthony Braxton’s music for marimba. The work was created in consultation with Braxton's Tricentric foundation and the result is an intimate exploration of the angles and logic of his compositions. Each track is compelling in its own way. For example. 'Number 136' sounds like more than two hands are at work, as melodies and counter melodies contrast and collide, while 'Number 142' is at first carried by a strong a rhythmic figure with the melodic ideas eventually pulling further and further away. 'Number 304' has suspended feeling, lifted by thick asymmetric runs, and 'Number 305' closes the recording with a tightly winding musical ball. MacDonald's ability to embrace all of the complexity of Braxton's music and express it with a single instrument is captivating.


There are many more Explorations to discover on MacDonald's bandcamp site.
Paul on Tuesday, May 31, 2022
Share