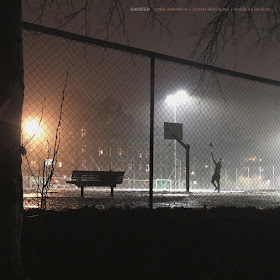 Almost ten years ago, in one of my first reviews for this website, I reviewed Fire! feat. Oren Ambarchi: In the Mouth - a Hand . I had been completely blown away by this band’s music. Fire!’s brutal force, their way of combining prog rock with free jazz - incredible. Oren Ambarchi, the Australian drummer turned avant guitarist, acted as a kind of booster, amplifying everything in Fire!’s music. When I listen to this album today, it has lost none of its fascination, for me it’s one of the best recordings of this still young century.

Ambarchi has continued collaborating with Fire! in the following years, for example on the no less extraordinary She Sleeps, She Sleeps. But there were also cooperations with individual musicians of the trio, especially with bassist Johan Berthling, e.g. on My Days Are Parker Than Your Nights and Tongue Tied. What is more, all three were recently again part of his big project extraordinaire Live Hubris (Black Truffle, 2021). As one can see, they never lost track of each other.

So when Ghosted by Ambarchi and Fire!’s rhythm section was announced, my excitement was high, as one might imagine. Will the music of the trio sound as brute as it did ten years ago? Will it be more rhythm-orientated like Live Hubris? Or will it revive the drones of My Days Are Darker? To cut a long story short, it's a mixture of the last two. And that's absolutely great.

Ghosted's qualities lie in the way Ambarchi, Berthling and Werliin adopt Fire!’s basic concept: The bass, almost minimalistically, holds a simple groove and the drums prance around it relatively freely. With Amabarchi as the locomotive, however, they develop a newfound interest in stripping back and zooming in on their music. On the one hand, the tracks are reduced, they are not bulging or bloated, on the other hand they float away from their center into the spherical.

This is not so much free jazz as rather some kind of ecstatic cosmic drive, as if Bill Frisell had fallen under the influence of mind-expanding drugs during an ECM recording (sorry, Bill). The kaleidoscope-like repetition of small, luminous motifs - primarily by Ambarchi, but also by the others who leave the given paths here and there - open the tracks. Time and timelessness coexist in a relaxed way, everything happens slowly and quickly at the same time.

Sometimes, when I have difficulties to fall asleep, I need music that guides me through the night. Then I listen to this album and imagine Ambarchi, Berthling and Werliin playing in a dark Berlin techno club at 6 a.m., the people are exhausted, they hang around in their lounge suites, listening to the band’s organic sound of minimalist classical and relaxed Kraut Rock. This is music that builds and expands into meandering structures, eventually ending in the bright, nocturnal zones reminiscent of the brooding slow jazz landscapes of Bohren Und Der Club of Gore.

Ghosted is available on vinyl and as a download.

You can listen to two tracks and order it here: