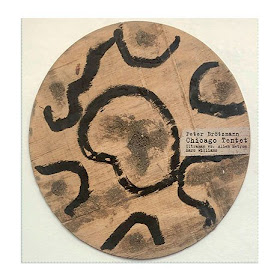 Anyone who was able to experience Peter Brötzmann’s Chicago Tentet live won’t forget the brute energy that this band was able to unleash. At the end of their incredible 15-year existence they played with almost no pre-conceived material or scores (partly because they had known each other for so long). However, when they started their project, this was completely different - the members could contribute compositions to the band’s repertoire. On their first release, the triple album 1 / 2 / 3 (Okka Disk, 1998), there are pieces by almost all members. After a US tour in the early 2000s, the band then went into the studio and the result from the sessions were two CDs for Okka Disk, A Short Visit to Nowhere and Broken English. On the first one, you can also find a piece by Mars Williams, the only one who didn’t have a composition on 1 / 2 / 3. In addition to “Hold That Thought“ (the name of the track), another Williams composition was recorded - though never released. Williams has rediscovered it in his archives recently and the Chicago label Corbett vs. Dempsey is now thankfully publishing it.

In case anyone has forgotten what the band was like, here are the hard facts: gathered around Peter Brötzmann (saxophones, tárogató and clarinets - here on tenor only) there were parts of the crème de la crème of the Chicago free jazz scene - Mars Williams and Ken Vandermark (saxophones), Jeb Bishop (trombone), Fred Lonberg-Holm (cello), Kent Kessler (bass), Michael Zerang and Hamid Drake (drums) - plus Mats Gustafsson (saxophones, here on alto only) and Joe McPhee (trumpet and saxophone, here on valve trombone).

Ultraman vs. Alien Metron is a perfect example of the band’s music in its early days. The improvisations are grouped around four themes, in which you are usually confronted with the full monty before everything comes to a halt and then new attempts are made again and again. In the process, the heads vary widely - from the brutal, almost heavy-metal-like riff remotely reminiscent of the theme of the first Godzilla movie, to Lonberg-Holm’s No Wave break everyone jumps on, to the unison melody of the saxophones (a reference to the Sonoré Trio that would later emerge from the band). In between, there is wild improvisation, the saxophones snap, chamber music phases are interspersed, the two percussionists battle, etc. At the end the Tentet blows up to full size and once again tunes in to the theme of the beginning. The whole thing is like a showcase of circus performers, with everyone getting a chance to show off their skills. It’s all completely organic, though, and fits into the overall concept of the composition.

Remixed by original sound engineer John McCortney, Ultraman vs. Alien Metron is a lost classic of improvised music from one of the best large-scale free jazz formats of all time. For fans of Brötzmann and the other musicians the record is certainly a must have, but it’s also great for newcomers to immerse themselves in the music of this band.

This year there have already been great previously unreleased masterpieces to discover ( Ayler and Mingus , for example). This album is another one.

Ultraman vs. Alien Metron is available on vinyl only. It’s limited to 1000 copies. You better be quick.