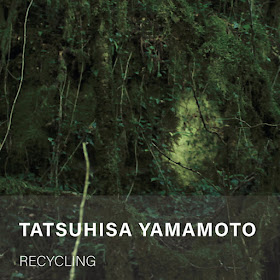 Some other recent releases include the companion statements Ashioto / Ashiato with Eiko Ishibashi, Daisuke Fujiwara, and Sudoh Toshiaki, Agrro Pan with Riki Hidaka and Marty Holoubek, Treatments with Giovanni Di Domenico, Ishibashi, Jim O'Rourke, and Joe Talia, and Mokusatsu with Di Domenico. Beyond the players above, many of whom are frequent collaborators, Yamamoto often works with Akira Sakata, usually alongside Ishibashi and O’Rourke.

Each track is a multi-movement downtempo melange of mostly kit sounds and synths. Tapped cymbals, snarehead brushwork, rumbling kick drum, shimmering crash. Swells, static, skips, sines. Electric sources supply counterpoint beyond timbre; sustain, density, and a beating rhythmic complexity for discrete kit’s sparse pulse. While the variety of textures from each source number about the same, the weight of drum sounds feels greater. Not through use of extended techniques or an exaggerated grain but by being largely relieved of its rhythmic drive it gains a more tactile focus. Or maybe each bump and tap carries a greater gravity because the ear hangs on the sounds surrounded by electric contrast like it hangs on those in silence. Which might be alluded to in traffic, chirping birds, and roomsound on “Reducing” and provide a compelling argument as musical material in the rhythmic partner of a talkative hawk in “Reusing.”