The Art of Turntablism 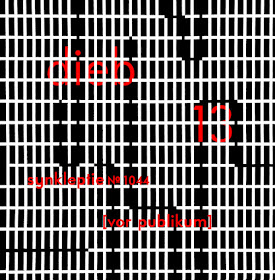 This 10’’ vinyl-only solo album was recorded live at the SmallForms series at Château Rouge in Vienna in August 2020 under the title interlockdown kleptosonics, as a reference to hacking essence of turntablism. It was the 1044th live set of dieb13, and apparently a rare opportunity to play live between the Covid-19 lockdowns. The cover art of Italian visual artist Esther Stocker captures the spirit of the stressful times and this enigmatic, cinematic (and dieb13 is also an experimental filmmaker) and quite a claustrophobic piece. This 22-minute piece begins with ars-poetic, crackling sounds of old vinyl. But slowly it adds more unsettling layers of seductive sounds that imagine the pulse of noisy and vivid urban sceneries that suddenly became disturbingly silent. But this piece is nuanced with strange, poetic beauty and suggestive, nervous voices - including the voice of Phil Minton, a close collaborator of dieb13, and noises. 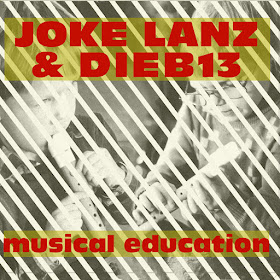 Musical Education is one of the rare albums of dieb13, known as a conscientious copyright objector, that is available in a digital form, and not only in a limited-edition vinyl-only format. Joke Lanz (of the dada-punkish trio Sudden Instant) and dieb13 have performed before with another Viennese turntables wizard Leo Riegler, but this duo plays on three turntables and was recorded live at GrillX in Vienna in autumn 2020. The 38-minute piece is a hyperactive, detailed yet twisted chat between two dubious but adventurous sonic explorers-nomads, most likely in the most dubious hours of the night. This stunning texture is full of dadaist humor and blends sensual voices of pixie-like aliens with urban, metro anchorperson and harsher, obnoxious characters, eccentric songs and fragmented jazz tunes. All is wrapped with wild and reckless imagination and fascinating rhythmic sensibility. This piece unfolds like a mysterious story that visits and rolls in its own leisured and chaotic pace into even more mysterious, infamous and noisier places, as it accumulates its extensive musical education. 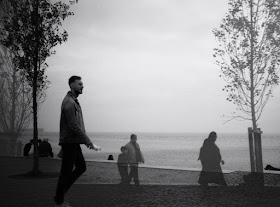 Os passos seguem como um espelho offers very little information about the meeting of autodidact, prolific multi-instrumentalist Ferran Fages (of Tàlveg and Ràdium Trio), who plays her on acoustic turntables and Portuguese Pedro Chambel, who is also a medieval history scholar and close collaborator of French composer Bruno Duplant, He began his musical career as a guitarist but now plays on electronics, alto sax and employs his voice and released the album on his own label.

The album offers three distinct pieces. “Tema 1” is a quiet and fragile drone and relies on the mechanical crackling sounds of Fages’ turntables and the almost silent extended breathing techniques of Chambel that eventually become one ambiguous sonic entity. “Tema 2” revolves around an enigmatic and hypnotic electronic pulse like an otherworldly meditative ritual. “Tema 3” interweaves again, but in a more tangible manner, the extended breathing techniques of Chambel and the fragmented and sudden, noisy blasts of Fages into a puzzling texture. Somehow, these weird collisions of sounds make perfect sense.