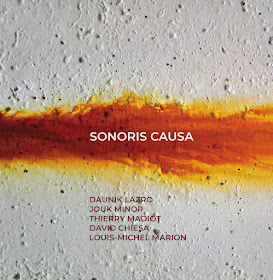 Extremely low frequencies are less a range than a realm. Below 30 cps they’re largely inaudible to the human ear, felt as vibration rather than sound, at high amplitude sometimes felt internally. 5 cps is less a tone than a tempo marking, 300 beats per minute, as pitch turns, ineluctably, into time. Bass vibrations have inspired Szilárd Mezei to form a band of four string basses and a tuba (see Szilárd Mezei Tubass Ensemble – Rested Turquoise (No Business, 2021)), while Anthony Braxton’s adventures in the lowest registers are numerous (read more here.)

Given a suspension between silence, power and terror, low frequencies exercise a special fascination for musicians, suggesting chthonic realms with low-pitched instruments in hyper-resonant spaces that are often vast, dark and enclosed. In 1993, in a prototypical gesture, Swiss saxophonist Werner Lüdi entered the Lucendro dam, taking along his baritone as well as his alto (Lüdi Solo: Lucendro, Unit Records, 1996). In 2000, Evan Parker and a Swiss wind quartet explored the sonics of an empty cistern above Zurich (September Winds, Creative Works). On their next meeting, Parker and band-member Peter A. Schmid were exploring the tubax, a form of contrabass saxophone, though they didn’t take the low-pitched horns to the cistern (Alder Brook, Leo Records, 2003).

That chthonic element is strong in Sonoris Causa (a pun on “honoris causa” but a hint, too, of what sound might bring into being. The quintet, recorded in 2003 at Festival Musique Action in Vandoeuvre, France, includes nothing but low pitches. Jouk Minor is playing a contrabass sarrusophone, certainly the most unusual instrument here. Similar in range to a contrabass saxophone (the bell appears at the top of the instrument and there are far more bends than in a saxophone—the recent tubax is similar in appearance), the instrument appears on one highly memorable 1924 recording, “Mandy Make Up Your Mind” by Clarence Williams’s Blue 5, where much of the track is devoted to a novelty solo by Sidney Bechet on the instrument (Louis Armstrong is also a member of the Williams band). David Chiésa and Louis-Michel Marion are both playing five-string double basses which allow a bassist to play a fourth lower than a conventional instrument. Thierry Madiot plays bass trombone and “telescopic tubes”, the name of which suggests something like a trombone in its function. That leaves Daunik Lazro, whose gruff, roaring baritone saxophone is the highest-pitched instrument in the band.

The basses are often bowed, emphasizing their resonance and a certain pitch variance. The harmonics of the basses and Lazro’s baritone emphasizing an echoing sub-pitch. Every instrument emphasizes fundamentals, while the bass reeds can render echoing wails that resemble winds blowing through canyons. Each wind instrument will repeat low-register plosives at one time or another, suggesting speech pitched below speech. What high pitches are here are always resonating in large-diameter columns. The music will thin, but the presence of three tracks is an illusion, there only to make the uninterrupted 66-minute performance easier to negotiate.

This sustained improvisation seeks mystery, power and a kind of occultation, even immuration, in sound, which the musicians seem to achieve. There are moments when they seem to be echo-locating, bouncing off one another’s sounds to achieve distance, stretching the stage to accommodate the sound, seeming to grow further apart, making and measuring a vast imaginary space. As it progresses, the music becomes more spacious, but also more meditative, the musicians more exploratory of this world of their own making. At the conclusion, however, the music returns to the suggestion of some ultimate trembling in the firmament.

I should also mention the first album by the four basses and a tuba, Szilárd Mezei Tubass Quintet, “Canons - 2nd Hoisting”, also on NoBusiness from 2012 and not mentioned in Nick’s review of “Rested Turquoise”:

Besides Bechet, Gerald Oshita also played the contrabass sarrusophone on several recordings with Roscoe Mitchell--he presumably didn't hate it as much as Bechet supposedly did, since he recorded with it several times! He has a memorable yawping solo on "You Wastin' My Tyme," a rocking song on Roscoe Mitchell and the Sound and Space Ensembles, and plays it on a few recordings by Space (a trio with Tom Buckner on vocals, I think I've only heard one of these).

terrific album and it is a good thing that you reviewed it here. I reached for it due to bandcamp recomendation algorithm and of course Lazro's name, who is to say beited the hook :)