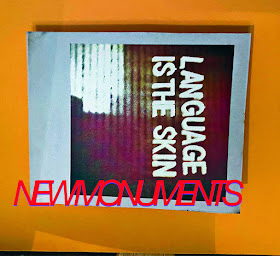 Coming off their 2018 release New Earth, I had high, and loud, expectations for Language is the Skin. Two-thirds of the core of the New Monuments group – Don Dietrich on sax and Ben Hall on drums – remains. However, here C. Spencer Yeh has been replaced by Dietrich’s daughter Camille Dietrich on cello, and e-bassist Tony Gordon has also joined the melee.

Language begins with some pulsing, which Dietrich quickly tears to shreds. Then come the drums and a steady, repeating single note bass (drum?) propulsion. And the New Monuments are off for a good 52 minutes and six tracks of anthracitic blast furnace explosion. Dietrich and Hall, of course, have some history together and their styles blend seamlessly. Dietrich rides atop it all, ululating like Ayler untethered from his hymnal and bop roots. Hall pounds away behind him, laying a rich textural foundation, which is equal parts askew jazz rhythm (he studied with Milford Graves, and it shows) and metallic noise. Gordon, meanwhile, absolutely shreds his bass with the gravity of Marino Pliakas and the speed of pure amphetamine. He also goes slow, low and heavy, introducing some sludge into the dissonant stew. Camille Dietrich is sometimes harder to distinguish from the rest of the ruckus, and her contributions more often fill out the sound than lead it. If one turns this up loud (as one must), though, one can really hear her cello fighting from the back of the turbulence, throwing out fuller tones, ominously recurring beeps and strangled shards of melody. She is somewhat less abrasive than Yeh could be in the group’s previous iteration. Still, as with Yeh, she uses effects to create scraping sonic environments one normal attributes to distorted electric guitar or other electronics. Indeed, Language is the Skin sounds more rounded (though not quite “polished”) than New Earth because of the interplay between Camille Dietrich and Gordon, who fill those spaces left by Don Dietrich and Hall’s maelstrom.

As impressive as New Monuments are as a unit, and a surprisingly tight one at that, Dietrich the elder still rises to the top. I just cannot get over how he is still able to, to steal a phrase from R. Crumb about Mats Gustafsson, torture his saxophone with such unrelenting fury for so long. Just listen to Reincarnation is Hard to Do, Lamprey Embouchure or Blush (a darkly ambient background barraged by Dietrich’s tortuous cries), or even the shorter numbers. Goddamn.

Language is the skin. Indeed, one can really feel this music, its energy, its unapologetic condemnation of (or lamentation for) a world in crisis. It sounds like New Monuments are still chasing that elusive new earth they pursued, whether better or dystopic, in their previous release. Especially if that pursuit involves raw, bestial numbers like those here, those that alternately give me giddy goosebumps and make my skin crawl, let’s hope they do not stop anytime soon.