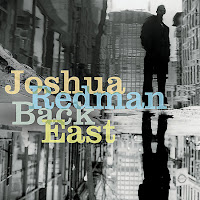 On this album Dewey Redman's song brings hommage to Sonny Rollins' Way Back West, the first sax trio album ever. When I started listening to it and heard the tones of "The Surrey With The Fringe On Top", I feared for the worst, but I kept listening, and to my satisfaction. The albums starts out within the tradition, but not for long, because Eastern scales and rhythms starts seeping into the music and they keep having their mark on most tracks of the CD, with titles such as "Zarafa", Coltrane's "India", Shorter's "Indian Song", "Mantra #5", "Indonesia". Two of Rollins' own songs are also covered. Although most pieces have a sax/bass/drums line-up, this is definitely not a "band" recording. Additional saxes join in on some pieces, and not the least : two tracks have Dewey Redman on sax, recorded before his death in September last year, other tracks have Joe Lovano and Chris Cheek as sidemen. The basses are played by Larry Grenadier, Reuben Rogers, Christian McBride and the drums by Ali Jackson, Brian Blade and Eric Harland, in short about the best you can hear on the circuit these days. A nice album, with great musicians and tight interplay, but if Redman had taken a little bit more risks, the overall effect would have been more gripping.
Stef on Sunday, June 10, 2007
Share

Congratulations for a very interesting and well done blog! I am not an expert on free jazz at all and reading your posts is very educating to me.

I had almost given up on Redman until I heard this album, even though I agree he could have been even more adventurous.

I wrote a post on Back East on my blog if you care to read it (in french, but you can use the translator), here:

Just Great album! By the way, here is some useful
website devoted to the
Back East album: Go