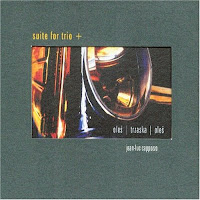 Better late than never. This album was released about two years ago, but I managed to get hold of it just now, so it can still get a review, and with reason. I have expressed my appreciation for the Polish twin brothers Marcin Oles (bass) and Bartlomiej Oles (drums) before, and with this album they climb even higher in my esteem. Their fellow countryman Mikolaj Trzaska plays sax to form their usual trio, and Frenchman Jean-Luc Cappozzo now also joins on trumpet. I had never heard of Cappozzo, and I'm glad I do now, because he is really excellent in this free musical environment, which is suprising for someone who apparently learned to play in the French army. This is the kind of free jazz that I like the most : free improvisation on a structured basis, creative, rhythmic, soft and intense. Listen to the title track : a unisono melody of sax and trumpet on a slow Eastern rhythm, out of which the trumpet frees itself for a beautiful solo, then the whole thing evolves into a bass solo by Marcin Oles, and believe me, this guy is among the best you can hear on the instrument these days, both pizzi and arco. His touch is both elegant and powerful, his improvisations melodic and creative (his solo bass album "Ornette On Bass" is also worth checking out). "JLC" starts with solo trumpet, then the band joins with some dissonant interplay, followed by arco bass which move into a folkish melody which could have been written by Henri Texier. "Budmo" is a slow, sad and gloomy piece, which stands in strong contrast to the next one,"5-5", a funky uptempo rhythm fest, with amongst others a stunning duet between trumpet and drums, which then evolves into a variation of Ravel's bolero, with the well-known slightly dancing rhythm. Mikolaj Trzaska, on bass clarinet, is the star of this track. You could say that Trzaska is almost the opposite of Peter Brötzmann : he is a very sensitive sax player with a velvet tone, although he can do some fierce and outside blowing if needed, but it always remains elegant. An I think that word sums up the whole musical style of this album. The last track, "Urodzaj", starts with flutes in a kind of jungle atmosphere, with light trumpet blasts, reminiscent of Don Cherry and Codona, but then Marcin Oles comes on the stage with a wonderfull bass line and he takes the whole band along into a beautiful melody with trumpet and sax alternatingly in unisono and counterpoint, fantastic, but too short, too short, too short... This is free music that is not aggressive, music that is accessisble even if you haven't heard this kind of approach before. Anyone with interest in jazz will appreciate this album. It's rhythmic, melodic, great mastering of the instruments, great interplay. A real treat. Don't miss it!
Stef on Sunday, June 10, 2007
Share

Indeed, these albums are also great. In my personal ratings I gave Mikro Muzik also five stars and LA Sketch Up four.

They should be known by many more people.