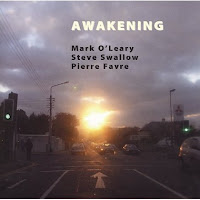 Mark O'Leary is an Irish jazz guitar player who has already published quite some albums, yet who is unfortunately too little known, especially Levitation with Tomasz Stanko (trumpet) and Billy Hart (drums) is also worth looking for. But don't look too far, because Leo Records has now issued all its albums, including the whole Braxton catalogue, for download via http://www.lulu.com/, for the democratic price of $ 5.49 per CD. What more do you want? Back to this album, it's a guitar trio, with Steve Swallow on bass and Pierre Favre on percussion. O'Leary's style is great, with a sound which is reminiscent of John Abercrombie on his Homecoming or Getaway albums, with the tone button at the lowest possible level and the reverb high, giving a very soft, warm and spacious atmosphere. Although the music is anchored in bop, with often walking bass and steady rhythm, it is extremely open to new forms, acoustic intermezzi, rock and free jazz influences, yet relatively accessible. "Intimate, or feather-light" may be the best adjectives to describe it, rare qualifiers indeed for a free setting such as this one, but make no mistake, this is adventurous music, full of tension, and in pieces such as "Melting", the atmosphere takes on gloomy and nervous connotations, yet the two qualifiers still apply. O'Leary is a great guitar player, with a very subtle touch, both in the arpeggios as in the fast soloing, yet his major skill is the unity of musical and sound approach he creates. It requires strong musical and compositional skills to keep the attention going for a trio outing, and this band does so extremely well on this album. 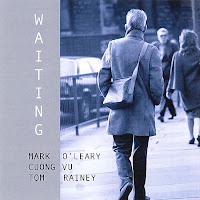 And O'Leary doesn't stop producing great material (and again, thank you Leo for putting all this on http://www.lulu.com/ , making these albums accessible for many among us music fanatics). On this album O'Leary ups the ante by working with Cuong Vu (trumpet) and Tom Rainey (drums), both exceptionally good musicians with their own style and approach and they prove to be a perfect fit for O'Leary's elegant adventurous approach. This album is dedicated to Samuel Beckett, the playwright of amongst others "Waiting for Godot", whose hundredth birthday anniversary was celebrated in 2006. Beckett was a pioneer of absurdist and surrealist theater of the period after the second world war, where religion, the meaning of life, so-called human values were strongly questioned and the incapacity of real communication between human beings emphasized. Yet if there is one thing which is absolutely fantastic on this album, it's precisely the communication between these three musicians. The title piece "Waiting" starts with acoustic guitar, very gently, to which the trumpet adds a beautiful improvization, creating the false expectation that the rest of the album will be in the same vein. This is not about discordance or dissonance, what you might expect from a Beckett tribute album, but quite the contrary, it's about tight interplay among three stellar musicians. The second piece illustrates this even better. "Endgame" offers a strong composition, with high tension nervousness in the strong tonal attack of the trumpet, to which O'Leary offers some fluttering counterpoint on electric guitar, again deep-toned, and wonderfully accentuated by Rainey. The third piece "Lucky" brings an esthetic which could fit the nomer ECM-jazz, highly stylized, creating visions of open space, yet things start to become rougher on "Mr. Krapps Neurosis", with screeching trumpet and high speed distorted guitar, to go even more down the road of madness and disorientation on "Assumption", with electronics, echo effects reinforcing the e-bow sounds. And it goes on like this, deeper and deeper into unchartered musical territory, with the trio creating an high energy high intensity music the likes of which I haven't heard in previous years, and all this with a very clear musical vision, creating a unique sound, with excellent balance between the calm and high intensity moments, hence creating a strong feeling of depth and variation. And also on the calm moments, like on "Godot", the guitar and the trumpet sound like whales communicating, with long and endless sad wails and moans, with Rainey meanwhile quadruple-timing the soloists, and what you believe is free improv appears to be perfectly composed and timed. Amazing. Without a doubt this album will be on the top-10 of the year. One more thing : of many of the best new albums I heard in the previous months, Tom Rainey is the drummer (Tim Berne, Mark Helias, David Torn, Brad Shepik, Tony Malaby). And that's no coincidence either.


Listen to sound samples from Waiting

O'Leary really is a fantastically fluent guitarist. It is hard to think of anyone who can play with so much technique without sounding flashy on one hand or rote on the other. I think he still wears some of his influences on this sleeve (Frissel, Abercrombie, the usuals), but even so, he is a great, distinctive player who will only get better.
I first downloaded "Awakening" a couple of months ago and just gave it a cursory listen. This may be a guy you get much better the second time through. You can download this recording for for about $5.50 American from the Leo site, and it's worth twice the price; which, by the by, would still be less than you'd pay for a hard copy in the US. And they use an open source code for the download called OGG-Vorbis which well and truly kicks up on mp3--by a lot. By far the best sounding download I have ever heard (of course, the Leo masters are very good ones).