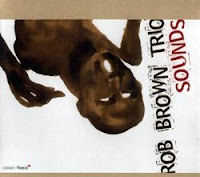 Rob Brown is one of those New York sax players who have always been able to combine free jazz blowing fests with melody, rhythm and emotion, but on this album he seems to have reached a state of mental peace and relaxation that is absent on his other albums. He is accompanied by Daniel Levin on cello and Satoshi Takeishi on percussion. His other recent albums are also worth looking for (Radiant Pools and The Big Picture), as are his collaborations with William Parker and Matthew Shipp. Admittedly, his alto does still howl and screech and wail at times, but then above a rhythmic and harmonic basis, with more often than not a recognizable melodic structure. The choice of the cello is a good one, because the instrument can play a more prominent second voice than a bass ever could, both arco and pizzicato, and on top of that Takeishi is a percussionist who manages to give depth to the music by giving the right accents rather than feeling forced to give an explicit rhythmic foundation. The opening track, "Sounds, Part 1, Archeology" immediately offers the musical vision of this band : a subdued unisono melody on a slow tempo, as an introduction to a tearing and heart-rending solo by Brown, followed by some open and equally soft improvizing by the whole band, just to end in joined harmony. This music is characterized by spaciousness and openness. The second piece "Sounds, Part 2, Antics" offers a more abstract feel, with a Mysterioso-like tonal build-up. The third piece starts with a slow cello introduction and Brown's following long solo fits like magic on this. "Stutter Step" is more in the free-bop idiom that we know from his previous albums such as "The Big Picture". "Tibetan Folk Song" starts with a long cello-percussion intro, and Brown again brings a more than credible improvization on this traditional source material. The CD ends in peaceful beauty. Who could have expected that much internal peace and musical quietness from a player like Brown? But the approach appears to be the right one, offering a strong musical unity without loosing any of the free creativity.
Stef on Thursday, June 14, 2007
Share

I liked this album when I first bought and listened to it, but I like it even more after repeated listens. It's subtle but strong and very musical (not a criticism in my book).