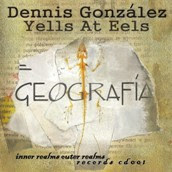 Dennis Gonzalez is a trumpet player whose tone and approach to music I really like : his tone is warm and composed, his music adventurous yet elegant. "Yells At Eels" is the name of the trio he has with his sons Stefan (drums, vibes) and Aaron (bass), yet often further supported by guest musicians, like on this album : Carl Smith on tenor, Devon Wells on flute, Kim Corbet on trombone, Bill Pohl on electric guitar, alternating each other for one or two tracks. The music is open, bluesy, quiet, beautiful and inspiring. The accent is on the common musical creation, the musicians weave tonal layers and search for a joint composition rather than demonstrating their improvisational instrumental skills. And the music really benefits from this functional approach. The pieces flow like clouds or water, melancholy, dramatic, slow, at moments impressive and impactful. Especially the long "Crow Soul" is powerful, and brings up memories of Terje Rypdal's Rolling Stone (on the Odissey LP version) in terms of rhythm, bass line, overall mood and tone, flowing seemlessly into the next, equally long, yet more energetic and more electronic "Mutation Station", which leads to a great climax. The last track is a dedication to William Parker, and rightly so, don't we love him all??? One of the other strengths of the album is the unity of style which is maintained throughout all the pieces. Strong.


The CD can be ordered from Dennis Gonzalez personally, and believe me, he puts it in the mail the day your e-mail reaches him on "dennisgonzalezx@aol.com".

Below you can watch a video of a Yells At Eels performance of Ornette Coleman's Happy House (nothing to do with this album, though)

Hey man, nice blog. I found it when searching for some Dennis Gonzalez stuff. I am going to be playing w/ German Bringas at Jazzorca in Mexico City in November, and with luck Dennis will be there too.

I've bookmarked this blog and will be back. You might want to check out my trio's site: