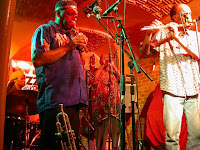 First, about five years ago I bought ODIM's "Time Is Of The Essence Is Beyond Time", which I thought was awfully chaotic and empty, so I put the band in the don't-ever-listen-to-them-again category . Some years later I was encouraged by Phil Freeman's excellent book "New York Is NOW! The New Wave Of Free Jazz" to listen to their first self-titled album and to "Now!", their second release, which I think are two absolutely fabulously brilliant albums. I was totally misguided by the reviews on Allmusic.com, that claim that "Time ..." is their best album, and in fact, it's quite the contrary.

Second, they have just released a double live album on the French label Marge, which got NO, I mean NO (ZERO) reviews whatsoever, anywhere....(hence the fact that I cannot show you the cover picture : nothing to be found on internet and I have no scanner to copy the cover for you). And it's not only hard to believe that this album received no attention so far, it's a crying shame too! So, lovers of free jazz, this album exists and it is excellent.

For those who don't know Other Dimensions In Music : the band consists of Roy Campbell on trumpet; Daniel Carter on sax, flute and trumpet; William Parker on bass and Hamid Drake on drums. And what they bring is free jazz at its best : spontaneous improvization with rhythm, empathy, beautiful soloing and telepathic interplay. These four stellar musicians have played together for decades and in various bands and it shows. Drake and Parker play like they are one person with two bodies, and their rhythmic foundation supports the tonal soundscapes weaved by Campbell and Carter, who both have a huge background, but more importantly, they play with the rare combination of emotional and creative power. There is lots of variation in the instruments used : Parker also uses the musette, the reed instrument played by Dewey Redman in Old & New Dreams, stopping his solo and switching to arco, Hamid Drake sings and plays snare drum, Carter sings as well. The second variation comes from the variety of styles they integrate into their improvizations, often implicitly : blues, swing, bop, african, middle-eastern, and the third variation comes from the levels of intensity, ranging from subdued and spiritual to high-pitched high energy playing, but rarely chaotic skronking, like the great swells of the ocean, moving up and down in large uninterupted movements, all different, yet all part of the same. And all this has a meaning - the titles speak for themselves : "Blues configuration", "Afro Carribean High Life", "Blues for Baghdad", "Funk The Government/The Betrayal of New Orleans/Hurricane Katrina", "Suite for Miles Davis", "For Louis, Cootie and Lester", "James Brown Ascension", ... gives you an idea what musical references are used to illustrate the titles. But it's not only political or musicological in nature, in essence their music is spiritual : "multilayered music that is drenched in vision. Blues vision, world music vision, 21st Century vision, it's the music called Black Mystery Music that comes from the deepest parts of Africa, Asia and Europe. Sounds that can be found in the furthest reaches of the cosmos. The mud that binds the music is the call of the human soul in need of healing. Combined with all the beautiful things that have ever existed since the beginning of time". And Parker continues in the liner notes : "We never know what will happen from minute to minute in the music but we are ready to go anywhere it wants to go, without being restricted by style". And that's exactly what this double CD has to offer : excellent free playing, moving naturally, rhythmically, full of intensity, full of spirituality and musical vision.

And you can at Sunset Records

Here are some sound samples from their previous album "Now!", just to give you an idea of what they sound like :
For The Glass Tear
Blue Expanded
Stef on Tuesday, July 24, 2007
Share

I'm with you on this. I was at Sunset jazz club the 2 nights this was recorded and the cd well captures the quality of the sets.
Highly recommended.

Btw, cool blog. I come he more and more often for the great reading.

I had no idea this album even existed. Thanks for the tip (and the kind words about my book)!

Phil - again, your book should be more widely read. It helped me open some internal musical doors, if you know what I mean ...