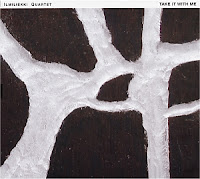 "Take It With Me" is the second album by the Finish band Ilmillieki, which consists of Verneri Pohjola (tp), Tuomo Prättälä (p), Antti Lötjönen (b), Olavi Louhivuori (dr). Their music is calm, restrained, with creative angles built on well structured forms leaving lots of room for free improvization, holding the middle between jazz and romantic classicism, and it that respect it made me think at times of the Lemon Juice Quartet. This music will not make you dance, but that's definitely not the purpose. The title track "Take It With Me" is based on a song by Tom Waits, and The Red Hot Chili Peppers' "Porcelain" gets covered as well as Suzanne Vega's"My Favorite Plum". But don't get fooled by this, this band's music is far away from the approach taken by The Bad Plus and some of its followers who cover rock songs in a jazzy fashion, no, this band is much too authentic for that, their endeavors entirely genuine, striving for true artistic expression rather than entertainment. And, in all honesty, I think that their own compositions are superior to the ones they cover. Recommended for those who like subdued freedom.

Listen to fragments on MySpace
Stef on Thursday, July 12, 2007
Share