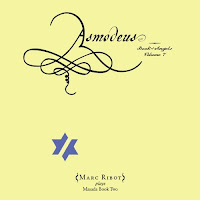 It's never a good idea to write a review before you've listened several times thorougly to a new album, then think it over, then carefully analyze the whole, maybe look up some references and background stuff, and start writing. It's just that this CD does not allow for that. This is straight-ahead instrumental hard rock by Marc Ribot on guitar, Trevor Dunn on bass and Grant Calvin Weston on drums, and I just can't waste time by thinking before sharing my enthusiasm with you. The album starts heavily, full speed, all guitar knobs and switches opened to the max and pedals pushed down, with exploding guitar licks and rhythm section, the musical equivalent of a nuclear attack. The most amazing thing is that Ribot gives an overview of 40 years of electric guitar pyrotechnics on one album, and then paradoxically on the lyrical Masada songbook, and he covers it starting with Hendrix over fusion over punk over avant-garde, ending somewhere with metalcore or death ambient or gothic metal or whatever they call that stuff these days, bringing bluesy solos ("Yezriel"), strong superfast unisono themes ("Cabriel"), lots of power chords, lots of shredding, to slow heavy pumping ("Zakun"), and all this interspersed with the most insane sound orgasms. Truly amazing, one of the most powerful guitar trio albums ever made. We know Ribot from his refined, creative work as a sideman to Tom Waits, or from his own almost classical work on the nylon string guitar, his avant-garde punk inventions with Shrek, his work with the Lounge Lizards, his more lyrical work with John Zorn's Bar Kokhba ensemble, or his Latin big-sellers with the fake Cubans, but on this one, he's outdone himself again, this one is beyond comparison. This guitar music is the wet dream of any guitar player, technically skilled, strong compositions, lots of variations in the styles used, rhytmic changes and hard, hard, hard, and fast, fast, fast, without a moment of rest, more energy than most young bands could muster these days. Truth be told, I've been laughing aloud from pure joy at hearing so much restrained violence. Violence is the word, and restrained is the word. There are no endless solos on this album, the longest piece is ten minutes, but most tracks are relatively compact, ten of them for not even 40 minutes of music. And on top of it all, all these tracks, which are so lyrical in essence, come from the Masada songbook, with klezmer scales to start with, but in no way comparable to the other "Books of Angels", this is more in the realm of the Fallen Angels, dark and cruel. And the success of the album is to the credit of the trio itself, not only to Ribot, also Dunn and Weston are astonishing, for their speed of execution, the tight interplay, the unrelenting hard-hitting energy. Amazing, a true musical statement, instrumental madness to the extreme, while remaining melodic, lyrical and rhythmic. Truly amazing.

I can only agree. What a bafflingly powerful album. Hendrix, Sharrock, Fripp and McLaughlin put in a melting pot with the energy meter firmly in the red.
Already a classic in my book as well.

Check out Mark O'Leary's cd on fmr
with Alex Cline and Steuart Liebig
SIGNS. If you like book of angels then you'll LOVE this!

So few guitarists do this kind of thing now - remember Greg Ginn? Last Exit? And Sonny Sharrock! Absolute frenzied bliss! I think I'll get my improv trio back together and just blast away!