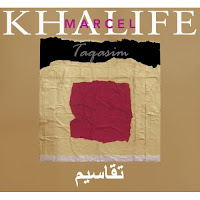 Marcel Khalife is a Lebanese oud player and composer, who, for once, restrained himself to a trio album (as compard to his other symphonic and heavily orchestral and cinematic output), offering all the sensitivity and intimacy that characterizes good music. His oud-playing is excellent as is Peter Herbert, the Austrian modern jazz bass player, who acts as his main sideman on this album, ocne in a while accompanied by Bachar Khalife on percussion . The album consists of three long tracks, which delve into Arabian music, but also which also have more modern, jazzy connotations, meeting halfway between both genres, mainly because of the common characteristics of openness to improvization in both Arabic music and jazz. The strength of this music lies exactly in the interplay between the two lead musicians. The purpose of this album is to bring an musical expression and tribute to the poetry of the Palestinian poet Mahmoud Darwish, whoever that may be. Regardless, this is great music.