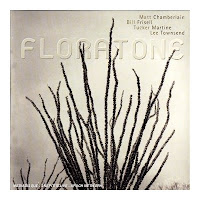 I have always had a love/hate relationship with the music of Bill Frisell, just like I have with John Zorn, but for the opposite reason : while Frisell makes some great music, he often falls into a mellowness in which you can drown, Zorn falls into thorny bushes which tear you to pieces and neither of those situations can be described as enjoyable. However, both have a more middle of the spectrum operating area, which is still sufficiently creative and original to be attractive. This record belongs to the category to which I can listen with pleasure (along with his The Elephant Sleeps But Still Remembers, East West, The Intercontinentals and Blues Dream), and it is in fact a joint album with Matt Chamberlain on drums, which was after a first recording, reprocessed by Tucker Martine and Lee Townsend, after which Frisell and Chamberlain had another go at it. Additional musicians are bassist Viktor Krauss, cornetist Ron Miles, and viola-player Eyvind Kang. And the result? Not bad, great playing as usual, great sound quality and interesting and extremely meticulous production. And yet, ... it all sounds a little too processed for my ears, a little bit too distant, like soundscapes indeed, but then in a setting you're no part of, like watching scenery on television. It lacks the immediacy and the emotional rapport you expect from jazz, and it lacks the smells, the bugs, the wind, the rough terrain and the personal effort you expect from being in a real landscape, and hence also much of the joy and reward you can get from it. Still, it has its great moments.